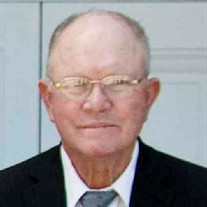 SMITHFIELD UT - Wm. Bruce Pitcher, 74, passed away Wednesday, April 8, 2015, at Logan Regional Hospital. He was surrounded by family after a courageous year long battle with esophageal cancer. Bruce was born the second child to William Alden and Mayma Neilson Pitcher on June 29, 1940. Bruce was raised in Smithfield, Utah. He attended Summit School and graduated from North Cache High School. On November 16, 1962, he married Mava Jones. They were blessed with two children. Last November, they celebrated their 52nd wedding anniversary. Bruce was drafted and served in the Army and the National Guard. He was honorably discharged in 1966 when he was diagnosed with diabetes. Bruce was a journeyman brick mason. He worked many years for LaVon Nielson and Sons Masonry, and later had his own business, Pitcher Masonry. He worked on numerous churches throughout Utah and Idaho. He worked on the Logan Regional Hospital and many of the buildings on the Utah State University campus. He took great pride in his work. Bruce was also an accomplished horse farrier. He was known in the valley for his ability to shoe a horse so it wouldn't interfere when it was racing. Bruce loved horses. He had a horse from an early age and most of his adult life. He was a member of Smithfield Summit Saddlers and the Skyline Cutter & Chariot Racing Association. He trained and raced horses all over the Intermountain area. When he was not able to be involved with horses due to health concerns, he turned his interest to trapshooting. He was a member of the Malad and Brigham City Gun Clubs. He made many valuable friendships while shooting. He especially loved all his friends he shot with on Saturdays. He also loved hunting, fishing, playing pool and cards with all his buddies at his barn. He passed his love for hunting, fishing, horses, and trapshooting on to his children and grandchildren. Bruce was an excellent dancer especially doing the Jitterbug. All the ladies wanted a dance with Bruce. He and Mava spent many nights when they were dating dancing in the hallway of the barn to the radio that was playing while they milked the cows. Bruce coached little league football for many years. He was one of the coaches of the first team to ever win a Little League Super Bowl in Smithfield. He is survived by his wife Mava, his children Kelly (Kurt) Elbert, and Cody (Therisa) Pitcher all of Smithfield. He is also survived by five grandchildren, Derek (Kelly) Elbert, Garrett Elbert, Andrew Pitcher, Tauni (Heath) Macfarlane, and Jake Pitcher; two great grandchildren, Matyx and Grace; one sister, Janet (Farrell) Karren, and was preceded in death by his parents. The family would like to give a special thanks to the staff at the Logan Cancer Institute, Logan Regional Hospital, and the Cache Valley Wound Clinic for their kindness and special care. A special thanks to all the nurses from CNS. "We love you Gramps" Graveside services will be will be held on Wednesday, April 15, 2015 at 11:00 am in the Smithfield Cemetery. A viewing will be held on Tuesday, April 14, 2015 at the Smithfield South Stake Center, 451 South 250 East, from 6:00 pm - 8:00 pm in Smithfield. Funeral Service under the direction of Cache Valley Mortuary, 3207 North Main, North Logan, UT 84341. 435-787-8514. Condolences may be made at www.cvmortuary.com.

The family of William Bruce Pitcher created this Life Tributes page to make it easy to share your memories.