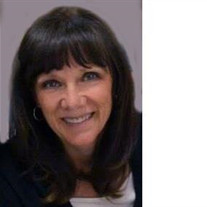 After a long and courageous battle with cancer, Wendy Smith Nuffer returned to her Heavenly Father on Saturday, May 30, 2015. She was greeted by her parents and many other family members. Wendy was born on November 2, 1958 in Preston, Idaho. She was welcomed by her parents Farrell and Aleen Smith and four older sisters. She was raised in Lewiston, Utah and attended local schools and graduated from Sky View High School. She attended Utah State University taking a variety of classes. She worked at R & & R Donnelly for 37 years. She also worked at Lowes the last few years. She was a member of the Church of Jesus Christ of Latter-day Saints and served in the Young Women’s Organization. She was married to Jeff Nuffer and though they were later divorced remained close friends. She loved being with her children Tyler, Tiffany Erica and granddaughter Jordyn. She enjoyed spending time with family members and attending Jordyn’s soccer games. She touched so many lives with loving acts of kindness. She is survived by her children, Tyler Jenson, Tiffany Erica Nuffer, Mandi Nuffer, and Stephaine Bodily. Grandchildren Jordyn Nevaeh, Arianne, Skyler, Taylor, Karsen, Kaiden, and Keltsie. Jeff Nuffer, sisters Vickie Watt, Judy Smith, Sharron Wood, Carol Gordon, and brother Alan Smith. She is also survived by many other extended family members. She was preceded in death by her parents Farrell Danney Smith and Aleen Olsen Smith. Visitation will be held Wednesday, June 3, 2015 from 6:00-8:00 p.m. at the 75 East Center, Hyde Park, Utah LDS church building. A visitation will be held Thursday June 4, 2015 from 9:30-10:30 prior to services that will begin at 11:00 a.m. at the Lewiston 3rd and 4th Ward LDS church building 16 South Main, Lewiston, Utah. Interment will be at the Lewiston, Utah Cemetery following the services. Funeral Service under the direction of Cache Valley Mortuary 3207 North Main, North Logan, Utah. 435-787-8514 Online condolences may be shared at www.cvmortuary.com “Don’t cry because I have died. Smile because I have lived.”

After a long and courageous battle with cancer, Wendy Smith Nuffer returned to her Heavenly Father on Saturday, May 30, 2015. She was greeted by her parents and many other family members. Wendy was born on November 2, 1958 in Preston, Idaho.... View Obituary & Service Information

The family of Wendy Smith Nuffer created this Life Tributes page to make it easy to share your memories.

After a long and courageous battle with cancer, Wendy Smith Nuffer...