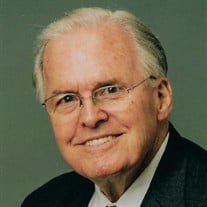 Bud Hylton, 83, from Smithfield, Utah passed away peacefully on October 22, 2020. He was born on July 8, 1937 in Philadelphia, PA and was the son of Vivian R. and Nona Mitchell Hylton. He was the oldest of four children. He is survived by his wife of 62 years, Janice Parks Hylton, four sons; Randy (Trish), Scott, David (Brenda), Matthew (Wendy) and a daughter, Elizabeth (Matt), 21 grandchildren and three great-grandchildren. Bud was preceded in death by his parents, his brother Mike, and two grandchildren; Robert and Benjamin. Bud graduated from Musselman High School in 1955 in Inwood, WV. He attended college at The University of Virginia in Charlottesville, VA and graduated with a BS in Economics in 1959. He also went on to earn a MBA from Georgia State University in Atlanta, GA, in 1972. He excelled in high school and football and received a four year college scholarship in football to the University of Virginia. It was at UVA where he met his sweetheart during history class. He waited for her after class and asked if he could walk her to her next class. They fell madly in love and have been inseparable ever since. They were married on January 27, 1958 in Cape Charles, VA and were sealed on June 15, 1971 in the Arizona Mesa Temple. He loved and adored Jan his whole life and the last words he said to her in his weakened state were “I love you”. He served four years in the United States Air Force as a Second Lieutenant. He enjoyed a mixed career as a salesman for various computer companies in his early years and later as a Manager/Salesman of Aircraft Sales for Piedmont Airlines and US Airways. Flying was one of his passions in life. Bud was baptized into The Church of Jesus Christ of Latter-day Saints on April 17, 1970 in Atlanta, GA along with his wife and two sons, Randy and Scott. He was an active and faithful member of the church for 50 years. He served in many callings and cherished his time serving as a Stake Patriarch and a temple ordinance worker. He and his wife served four missions: England London South Mission, June 1998-June 2000; Philippines Quezon City Mission, April 2004-November 2005; Utah Salt Lake City Church and Family History Mission July 2008-April 2010; Washington, DC Temple Mission, October 2012-April 2014. Bud’s testimony of the gospel was something he wanted to share with everyone especially his dear family. He knew the gospel was true from the first time the missionaries shared their message with him, and he never wavered. He loved the gospel and bore his testimony every chance he had. His great loves were his wife & family and the gospel. There will be a viewing at Cache Valley Mortuary, 80 West 4200 North, Hyde Park on October 27 from 6-8 pm and face masks are required for all who attend. Due to Covid restrictions, the funeral services will be for the family at 11:00 am, October 28 at Cache Valley Mortuary. A graveside service will follow at 12 noon at Smithfield Cemetery.

Bud Hylton, 83, from Smithfield, Utah passed away peacefully on October 22, 2020. He was born on July 8, 1937 in Philadelphia, PA and was the son of Vivian R. and Nona Mitchell Hylton. He was the oldest of four children. He is survived by... View Obituary & Service Information

The family of Vivian (Bud) Randolph Hylton Jr created this Life Tributes page to make it easy to share your memories.