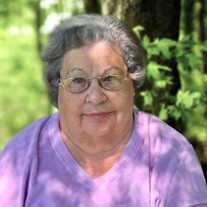 Vera Venna Reynolds Gerber was born 20 November 1943, in her Grandma Ethel’s house in Ashton, Idaho, to Burt and Vera Reynolds. She is the oldest of 6 children. She returned to her heavenly home on 5 July 2019, from her own home in Smithfield, Utah. She spent her young years growing up on the Farm located “on the other side of the river” 5 miles west of Ashton, Idaho. She moved to Logan, Utah with her family between her Freshman and Sophomore years in High School. She met Robert N. Gerber at Logan High School while they both played in the band that first year. They were Married in the Logan temple 5 years later. She was able to complete 2 years of college while working and supporting Bob until he graduated from USU. They moved to Texas where Bob’s employment took them and where their 4 children were born. She Taught early morning Seminary in Texas, and over the years has held almost every position in Primary, from Pres, to teacher of every age group and chorister. She served a mission with her husband in Vancouver, British Columbia, was an extensive personal Journal writer, and was able to travel through Europe with her husband, sister and bother-in-law. She is proceeded in death, by her parents and a Son-in-Law She leaves behind her husband of almost 54 years, her children Robyn Owens (Richard Owens deceased), Robert R. Gerber ‘Reyn’, Jennifer Gerber, Adam Gerber, Joshua and Kristal Gerber, 12 grandchildren, and 6 great grandchildren. Viewings will be held Monday July 15th from 6-8 pm and Tuesday July 16th 10-11 am at the Smithfield North Stake Center 155 West 4th North, Smithfield, Utah. Funeral Services will follow at the same location at 12 noon. Funeral arrangements are under the direction of Cache Valley Mortuary, 80 W. 4200 N. Hyde Park, Utah.

Vera Venna Reynolds Gerber was born 20 November 1943, in her Grandma Ethel&#8217;s house in Ashton, Idaho, to Burt and Vera Reynolds. She is the oldest of 6 children. She returned to her heavenly home on 5 July 2019, from her own home in Smithfield,... View Obituary & Service Information

The family of Venna Reynolds Gerber created this Life Tributes page to make it easy to share your memories.