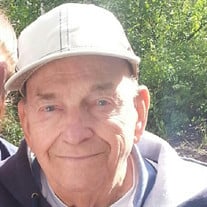 Thede Max HarrisonDecember 30, 1925 – January 23, 2016Thede Max Harrison, 90, was blessed to have loving family surround him at his home during the time of his passing on Saturday, January 23, 2016. He was born December 30, 1925, in Afton, Wyoming, ninth child of Otto and Fannie Harrison. He married Helen Fisher on August 11, 1943, in the Salt Lake Temple. They were married for 53 years and raised 14 children. Helen died in 1997 unexpectedly. In 2000 he married Jean Ryan. They would have celebrated their 16th Anniversary on January 28th. He served in the U.S. Navy during World War II. He was a Postman for 30 years in Logan Utah. He was an avid bowler for many years. He was a member of the LDS Church and held many callings. He is preceded in death by his wife Helen, a son Dana and all of his siblings. Surviving are his children: Amy (Otto) Derr, Max (Miriam) Harrison, Linda Calvin, Richard (Young Mi) Harrison, Peggy (Max) Hyer, Susan (Dan) Waters, Kevin Harrison, Mark (Deb) Harrison, Colin (Bonnie) Harrison, Kim (Charlene) Harrison, Roseanne (Tony) James, Rex Harrison, and Wade (Joni) Harrison. He is grandfather of 53, great-grandfather of 93 and great-great grandfather of 8 with Helen, and 9 children and numerous grandchildren with Jean. All love him very much. He was a gentle and kind man with a quick sense of humor. Funeral Services and viewing will be at the Bridgerland Park 1st Ward LDS Church building at 825 N 200 W in Logan, Utah. Viewing will be on Tuesday, January 26th from 6-8 p.m. and Wednesday from 9:30-10:30 a.m. with the funeral at 11 a.m. Burial will be at the Logan Utah Cemetery.

The family of Thede Max Harrison created this Life Tributes page to make it easy to share your memories.