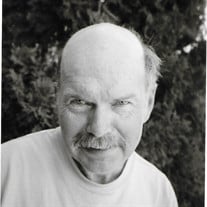 Terry Lee Goodsell left this earthly life, after having fought a valiant battle with Parkinson’s disease, on July 1st 2017. Terry was born on Jan 18th 1956. He was the fourth child and third son of Lawrence Hansen Goodsell and Elizabeth “Beth” Green Goodsell. He called Newton home. He grew up with the freedom to roam the town, the fields, and even cross the bridge to Cache Junction. His father taught him the value of hard work and Terry was up early and moving sprinkler pipe at the ripe old age of 8. Terry was a willing helper as he went around working for neighbors or the city on plumbing or other projects with his Dad. Terry graduated from Sky View High School in 1974. He married Debra Lyn Johnson in Dec of that year. They have four wonderful children, Jeff (Amanda) Goodsell, Brian, Kevin, and Joanie (Ryan) Anderson. Terry worked hard and enjoyed jobs with Hestons, Wurlitzer, Brownie Hansen, Bart Benson, ATK and Norval Jones before buying his backhoe and starting Terry’s Backhoe. His business was very successful and his boys worked right along his side. Ask Terry about a water line, a septic tank, an irrigation valve, and even as his ability to communicate diminished, he often could give details that were right on target. Newton Town honored him with his service to the community in 2008. He served on the town council, worked as water master, on the irrigation board and helped many neighbors in need. He was honored for being an EMT for 17 Years. It was difficult for him to let that go when he no longer had the ability to use those fine motor skills. For 35 years he was a volunteer firefighter, was an instructor, and loved the camaraderie of the squad. In the fall after the farming was put to bed it was time to go hunting. Birds were the prey of choice. Setting out at 2 AM with Ron and Craig Petersen, Jim Mullen and other crazy hunters was what life was all about. Out in the cold and wet, hunkered down in a blind, setting out decoys. That was something to look forward to. In the winter cross country skiing kept him in shape. He also enjoyed playing racquetball, riding his bike to Newton Dam on a Sunday afternoon, and working in his vegetable garden. He grew amazing carrots and beets which his mom would pickle every year. As the disease progressed Terry rode a stationary bike to work his muscles to keep his mobility. Terry had a very special relationship with his mother. He honored his parents. The noon meal was always at Grandma’s house. If you needed to find Terry you knew you catch him at lunch at his moms. He took his mother to visit his Dad at Sunshine Terrace every night but Wednesday, because that was fire drill or EMT night. He took her grocery shopping early every Saturday morning, so they could beat the crowds. In 2007 Terry married Carol Jensen. They shared many tender moments over the next 10 years. One of which was the annual 24th of July Newton Town celebration. Terry’s children and grandchildren would all come home to Newton to share in festivities. Terry loves his Oakland, Kennedy, Kylee, Marcus, Gabby, Dylan, Sadie, and Kaden. He was proud of all their accomplishments. Even when it was difficult for him to travel he attended their blessings and baptisms. Terry is survived by his wife, his children, grandchildren and siblings, Larry, Jerold(Butch) and Diane Patison. His parents were there to greet him on the other side of the veil. The family would like to thank all the people that touched Terry’s life during his battle with Parkinson’s disease. The staff at Legacy House, the staff at Sunshine Terrace and hospice, Dr. Nash and Kim at the Budge Clinic , Dr. Thulin and Megan Zorn at the U of U Neurology Center. A special thanks to Dez Zollinger for her love and friendship went far beyond the job. We thank the whole town of Newton for welcoming one of their own home again. A viewing will be held from 6 to 8 PM on Thursday July 6th at the Newton LDS church. Funeral Services will be Friday July 7th at 11 AM with a viewing prior from 9:30 to 10:30 AM. In lieu of flower donations may be made to the National Parkinson Foundation in its fight against this debilitating disease .Funeral Services are under the direction of Cache Valley Mortuary. 80 West 4200 North Hyde Park 435-787-8514. Share a condolence of Terry at www.cvmortuary.com.

Terry Lee Goodsell left this earthly life, after having fought a valiant battle with Parkinson&#8217;s disease, on July 1st 2017. Terry was born on Jan 18th 1956. He was the fourth child and third son of Lawrence Hansen Goodsell and Elizabeth... View Obituary & Service Information

The family of Terry Lee Goodsell created this Life Tributes page to make it easy to share your memories.

Terry Lee Goodsell left this earthly life, after having fought...