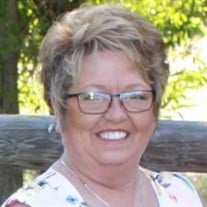 Tamara Eames, 60 bravely ended her battle with kidney failure on Wednesday, February 9, 2022. She was born July 17, 1961, to Julian Ray and Beverly Dawn Gillins. Tamara was the fourth daughter of nine kids and loved being a part of a big family. As a child Tamara lived in Trenton until she was 8 when her family moved to a farm in South Logan. After moving away, she realized how much she loved the farm life. She fondly talked of spending summers in the Logan River and deep swimming hole behind the barn followed by ice skating on the pond behind the house in the winter. Tamara graduated from Sky View High School and later married Randy Eames on May 3rd, 1986. They raised their family in River Heights and later built their dream home in Amalga, Utah in 2001. As a young lady she worked for Gossner Cheese then Bornes; and has enjoyed working the last 20 years for Paragon Medical. Tamara supported Randy while he began his Outfitting Business where she worked as a camp cook. Although she hated to cook, she loved the people. Through the business she was able to make amazing life-long friends, and travel to many places. Tamara could not be happier than to be found supporting her children and grandchildren in all aspects of life. She could be found on every sideline, in every bleacher of every event; big or small. A close second was driving her car with the top down. Tamara is survived by her husband, mother, children Robert (Rebecca) Eames, Tiandra (Jason) Sazama, grandchildren, Kelcie, Rayden, Robbie, Devin, Jase and Oaklie; siblings Marva (Val) Spillett, Julie Gillins, Steven Gillins, and Kurtis (Delene) Gillins. She is proceeded in death by her Father, sister Shayla Ashby, brothers Bently and Dennis and father-in-law Emerson Eames. Tamara had wonderful care through Logan Dialysis Center. Our family appreciates the good treatment and friendship she felt from everyone. We also have a special thank you to Dr. Schmidt and Dr. Smith for the great care that they have given her through the years. Funeral services will be held Friday, February 18, 2022 at 12:00pm at the Amalga Stake Center, 6521 N 2400 W, Amalga, Utah. A viewing will be held Thursday evening, February 17, from 6-8 pm and Friday from 10:30-11:30am at the church prior to the funeral. Interment will be in the Newton Cemetery.

Tamara Eames, 60 bravely ended her battle with kidney failure on Wednesday, February 9, 2022. She was born July 17, 1961, to Julian Ray and Beverly Dawn Gillins. Tamara was the fourth daughter of nine kids and loved being a part of a big family. As... View Obituary & Service Information

The family of Tamara Eames created this Life Tributes page to make it easy to share your memories.