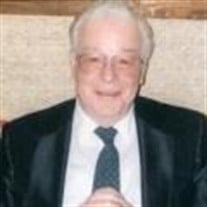 Stephen Clyde Muir10/17/1931 – 02/15/2016Stephen Clyde “Casey” Muir, 84, of Mendon, Utah, passed away Monday, Feb. 15, 2016, at Sunshine Terrace.Clyde was born to Stephen Longstroth Muir and Clara Hutchison Muir on Oct. 17,1931. He was the oldest of seven children. He grew up in Mendon, where he attended school prior to going to South Cache High School. He prepared to serve an LDS mission in the Great Lakes area but never got the opportunity to do that because all mission calls were rescinded due the draft. He enlisted in the Air Force, where he served as a wheeled-vehicle mechanic in Okinawa during the Korean War.He married Beth Campbell on May 24,1957, and they were later sealed for time and eternity. They made their home in Mendon, where they raised one son and three daughters.Clyde worked mainly as a mechanic and truck driver for Millers, Don Bybee Trucking and Gilt Edge Flour Mills. He also served as Mendon city’s marshal.He had a beautiful singing voice and was always accompanied by his talented wife Beth. Together they shared their musical talents freely over the years at countless ward and community functions and hundreds of funerals. He and Beth served an LDS mission in the special needs Seminary and Institute program and later as officiators in the Logan LDS Temple. They reluctantly left Mendon several years ago but made wonderful new friends in the Spring Street retirement neighborhood they lived in. Clyde loved to visit, tell stories and reminisce about growing up in Mendon.He is survived by his son, Darren Muir of Salt Lake, his daughters, Stephanie Muir of Logan and Monika (Vern) Callahan of Nibley, nine grandchildren, nine great-grandchildren, his siblings, Harriet (Lee) Jackson of North Logan, Douglas Muir of Bozeman Montana, Mary (Terry) Haslam of Sandy and numerous nieces and nephews.He was proceeded in death by his parents, younger brothers Val Dean, Thomas Burke and Harvey Scott, his oldest daughter Julie Muir, grandson Zackary Callahan and most recently his beautiful wife of 57 years, Beth.Funeral services are under the direction of Cache Valley Mortuary and will be held Saturday, Feb. 20, 2016, at 11 a.m. at the Bridgerland Park First Ward LDS church, 825 N. 200 West, Logan. There will be a viewing, also at the church, Friday from 6 to 8 p.m. and Saturday prior to the funeral from 9:30 to 10:30 a.m. Burial will be at the Mendon City Cemetery.Our family wishes to thank Dr. Michael Stones and his staff and the staff at Sunshine Terrace for the skilled and dignified care he received.

The family of Stephen Clyde Muir created this Life Tributes page to make it easy to share your memories.