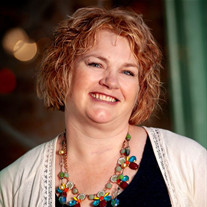 Stephanie Lyn Meikle Austin passed away May 26, 2019 from a rare disease, Mast Cell Activation Disorder, that she was diagnosed with four years ago. She fought so hard to get better, going to the Mayo Clinic and specialists in New York. Thank you to those who helped get her there! Thank you to her doctors in Logan and pharmacies in Utah who never stopped encouraging her and did everything in their power to help.   Stephanie was born in Logan, Utah on December 28, 1974, the second child of Lynn and Evelyn Boyack Meikle. Stephanie grew up on the family farm in Smithfield Canyon and graduated from Sky View High School in 1993 where she was active in the band’s color guard.  Stephanie attended USU (almost graduated). She met B. Douglas Austin at Utah State and they were married on May 25, 1995 in the Jordan River Temple. Together they have four children, Kathryn Marie (Katie), Madalyn Jean (Maddie), Bevan John, and Michael Blaine (Mick). They have been raising their children in Smithfield, Utah. Doug has been faithfully by Stephanie’s side during her numerous health issues during their marriage. His deep love for her has never been more apparent as he has taken care of her and their family for the last four years. As soon as Stephanie turned 16 she started working. Stephanie loved to create and she and Doug had a business doing flowers and decorations for weddings. She enjoyed working at a scrapbook store where she and her sister, Alesa, hosted many scrapbook workshops. She spent many years as a Payroll Specialist at Sum of All Numbers, a business owned by her sister Holly, until her health prevented her from being able to work. She also made lifelong friends as a foot zoner, until her bad health forced her to give that up as well. In order to make up for the loss of income, a friend offered them an opportunity to work with vanilla beans. Doug did the physical work, and Stephanie encouraged the co-op members in their endeavors to have REAL vanilla extract.   Stephanie had many ambitions, one of which was becoming a runner. To celebrate 2011 she accomplished her goal to complete 11 races. In 2013, she completed five half marathons.  Her crowning achievement was training for and completing a full marathon in 2014. This was one of her proudest moments and was made possible by her family and friends who supported her and ran with her the entire 26.2 miles. Stephanie was a wonderful mother who volunteered in her children’s classrooms and held many positions in the PTA. Until she was physically unable to, she never missed an opportunity to support her kids in all their endeavors, attending almost every game and performance, always encouraging them to participate in activities to improve their lives. She was excited when Maddie became part of the Color Guard and always rejoiced when Katie sang. She also loved watching her two boys play lacrosse and participate in many local performances. Family was everything to her! Stephanie was a faithful member of the Church of Jesus Christ of Latter-day Saints and was always willing to serve in any capacity. She had a strong testimony of her Savior and was faithful, caring, and always found ways to lift others despite her pain and suffering. Stephanie is survived by her husband, Doug, and her children: Katie, Maddie, Bevan and Mick.  She is also survived by her mother, Evelyn Meikle, brother, Travis Meikle (Juli), sisters, Alesa Larsen (Justin) and Holly De Vito (Frank), her mother-in-law, Carol Austin Anderson (Tim),  sister-in-law, Leslie Austin, brothers-in-law, KC and Brian Austin (Jamie). She was preceded in death by her father, Lynn Meikle, whom she dearly missed, her baby, Stephen and her father-in-law Blaine Austin. The funeral will be held on Saturday at 11:00 a.m. Friends can visit with the family on Friday evening from 6:00 to 8:00 p.m. and Saturday morning from 9:30 to 10:30. Both the viewing and the funeral will be held at the 7th ward building, 79 East 200 South, Smithfield. Stephanie always said that she wanted a celebration, not a funeral. In honor of her love for running and her zest for life, we are hoping that many of you will join us in wearing your running shoes or a fascinator at Saturday’s services. In lieu of flowers a scholarship fund has been established for her children. Donations can be made at Logan Cache Rich Credit Union, 72 E. 700 No, Logan, Utah, 84321 under the name of  Austin Children Scholarship Fund. Cache Valley Mortuary is serving the family. Memories and condolences may be shared with the family at www.cvmortuary.com.

Stephanie Lyn Meikle Austin passed away May 26, 2019 from a rare disease, Mast Cell Activation Disorder, that she was diagnosed with four years ago. She fought so hard to get better, going to the Mayo Clinic and specialists in New York. Thank... View Obituary & Service Information

The family of Stephanie Lyn Meikle Austin created this Life Tributes page to make it easy to share your memories.