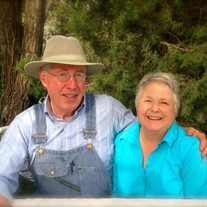 Stanley Ruel Campbell passed away peacefully surrounded by family on May 5, 2021, after suffering a stroke several days earlier. Stan was born April 10,1945 at his grandmother’s house in Blackfoot Idaho, the fourth of 11 children born to his parents, Sanford and Rosalie Campbell. Sanford and Rosalie had a home in Logan, but the family farmed and lived during the summers in Juniper, Idaho, where his grandparents had homesteaded years earlier. As a young man, Stan served a two year mission for the Church of Jesus Christ of Latter Day Saints in Scotland. Following his mission, he briefly attended Ricks College (BYU-Idaho), where he met his eternal companion, Diana (Seattle, Washington). They were married in the Logan temple in August of 1967, right before fall harvest, and Stan’s bride from Seattle was quickly introduced to the farm life. Stan and Diana lived the first several years of their marriage between Juniper, Idaho and Mendon, Utah, but eventually moved permanently to Juniper around the same time the freeway was being built, and became the first year-round residents of that community. It was there they built their home and raised their 12 children. They attended school, church and other community functions in nearby Malta, Idaho, and have built lifelong friendships with the people from Malta and other surrounding communities. Stan was a lifelong and devoted member of the Church of Jesus Christ of Latter-Day Saints, serving in many capacities throughout his life. He especially loved scouting, and is still loved by many of the young scouts who were influenced by him during his time in scouting. Stan also served another church mission later in his life with Diana in Orlando, Florida. Stan never met a person he didn’t like. His love for people was apparent in everything he did. Relationships were always a priority, and he was at ease with people from all walks of life. His influence was often felt as he ministered each day of his life in quiet and personal ways, becoming instrumental in affecting the lives and testimonies of many individuals through his one-on-one interactions with them. Each of his children and grandchildren always felt like they were his favorite. He weaved parenting and farming seamlessly, with his children never far behind him, fixing, growing, plowing, and harvesting, but mostly learning from his wisdom and stories about life, church history, family history, and the history of Juniper and the Raft River valley. His legacy lives on through his siblings, Gaylon (Judy), Dorothy, Ron (Mary Jean), Evan (Marion), Bruce (Kayleen), Ruby (Tom), Paul (Paulette), and Wayne (Karen) and his children, Christene (José), Mary, Sarah (Chad), Elizabeth (Trevor), Ben (Melissa), Becky (Larry), Esther (Phil), Joseph (Tawny), Steve (Natalie), Jim, and Mike (Jennifer), as well as 44 grandchildren and 6 great-grandchildren. He was preceded in death by his eternal companion, Diana, his daughter and son-in-law, Ruth and Nick Weaver, and granddaughter, Audrey Weaver, as well as his parents, Sanford and Rosalie Campbell, and his brother Eric and sister, Jeanne Marie. Funeral services will take place on Saturday, May 8, 2021 at 11 AM at the Raft River LDS Church. Guests are invited to attend an open house at the church prior to the funeral service from 9:00 AM to 10:30. Address and directions to the church: 2551 E 300 South Rd, Declo Idaho (The address must be entered as written or it will take you somewhere else). Physical directions: Take the Yale Road exit (exit 228) off I-84. Go east 6.5 miles to 2550 E (Nellie’s Lane) and turn south. Go 2 miles and the church is on your left. Join Zoom Meeting https://zoom.us/j/99405386284?pwd=bTNCY2Fwb0JVSmlvdkVwVi9BT2hzUT09 Meeting ID: 994 0538 6284 Passcode: 032073

Stanley Ruel Campbell passed away peacefully surrounded by family on May 5, 2021, after suffering a stroke several days earlier. Stan was born April 10,1945 at his grandmother&#8217;s house in Blackfoot Idaho, the fourth of 11 children born... View Obituary & Service Information

The family of Stanley Ruel Campbell created this Life Tributes page to make it easy to share your memories.