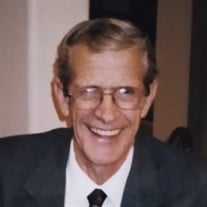 Our Beloved "Papa", Stanley Claire Brown, passed away Monday, March 22nd at 12:30 am, after a valiant fight against cancer. Stanley was surrounded by his loving family as he gently transitioned back to his Heavenly home. Stanley C. Brown was born into a loving home in Lewiston in 1936. He was the third child born to Alfred Louis Brown and Larna Hendricks. His older brothers Alfred and Dale welcomed him into the family, and his siblings Gary, Louanne, Elaine and Kevin came along soon after. Stan went on to graduate high school at North Cache High in Logan, Utah. He attended Utah State University and then joined the military. He served 3 years in the Army, beginning his service near the end of the Korean War. In 1960, he married his sweetheart, Pauline Anderson, of Mink Creek, Idaho. Papa said that the first time he saw her, she was sitting on a fence in her baseball uniform, her long black hair in a ponytail under her baseball cap, and he knew right then, that he was going to marry her. Together, they had 6 children. Steven, David and Darin followed by Kathy, Susan and Melissa. Their family was cherished above all else, and they were thrilled to go on to be blessed with 30 grandchildren, 26 great-grandchildren, and countless others that were unofficially adopted into their family. They welcomed all into their home, and made each one feel welcomed, loved and valued. Stan landed on a career in Cable TV. He managed cable systems in Oregon, Washington, Idaho, Nevada and California. He served as vice president of the Nevada Cable TV Association and was a member of the Electronic Advisory Board in Oregon. He always enjoyed being an active member of his community. He served as a city councilman and a member of the Rotary Club. He served as a counselor in Sunday School, Elder Quorums President, Scoutmaster, Explorer Advisor and secretary to the High Priests Presidency. Most will remember him as always having a joke to tell you, or a funny story about something one of his grandkids did. Most will remember what a good friend or good neighbor he was. Most will remember a time that Stan had a word of encouragement, a helping hand or a hug to give them when they needed it. Most will remember that he was hard-working, honest and compassionate. But only his family will remember why we called him "Stan the Man" and how much of his logic, vocabulary and code of ethics will live on through us. He was an honorable man. A good man. And he will be loved and missed by us all. A service will be held for Stan on Saturday, March 27th at 2:00 pm at the LDS church located at 345 South 1000 West, Tremonton Utah. The service will also be streamed live on Zoom. The link for the live stream will be posted on his Memorial Page on Everloved.com. In lieu of flowers, the family requests that a donation to the American Cancer Society be made in his honor.

Our Beloved "Papa", Stanley Claire Brown, passed away Monday, March 22nd at 12:30 am, after a valiant fight against cancer. Stanley was surrounded by his loving family as he gently transitioned back to his Heavenly home. Stanley C. Brown... View Obituary & Service Information

The family of Stanley Claire Brown created this Life Tributes page to make it easy to share your memories.