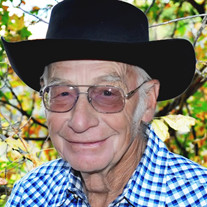 Standley James Poulsen Standley James Poulsen, 85, of Wellsville, Utah, passed away peacefully on September 17, 2019 at the Logan Regional Hospital. He was Born October 30, 1933, the 5 th and youngest child of Elnora Hauser and Clifford Leroy Poulsen of Lewiston, Utah. Stan was a soft spoken man that was always quietly serving others. His gentle and kind ways will be missed greatly. After graduating from North Cache High School, Stan entered the Army and served for 2 years during the Korean War. He then served a mission for the Church of Jesus Christ of Latter-day Saints to Melbourne Australia – journeying by ship to get there. Stan attended Utah State University, graduating in Business in 1963. While there, he met his sweetheart, Shirley Buist Kerr. They were married on June 30, 1961 and had 4 sons together. Stan was employed by the US Forest Service and worked in the La Sal, Targee, Payette, Cache, and Ashley National Forests. After leaving the Forest Service, Stan went to work as a Contracting Officer at Hill Air Force base. He and Shirley have lived in Wellsville for the past 55 years where they have been active members of the community. Stan was a volunteer fire fighter in Wellsville for 40 years. He and Shirley worked for many years on the Wellsville Beautification Committee and have helped with a wide variety of Founder’s Day activities over many years. They were both given the Outstanding Citizen Award for their community service in 1988 and 2008. Stan was also honored to be chosen as Marshall of the Day for Wellsville Founder’s Day. After retirement from the federal government, he went to work for Wellsville City caring for the city parks and cemetery, coming to be known as “The Lawn Mower Man.” He held many callings as a member of the Church of Jesus Christ of Latter-day Saints including bishopric member and High Councilman. Stan loved to be outdoors and took his boys hunting with him often. He and Shirley also enjoyed square dancing, golfing, and taking scenic rides and trips with friends. He loved his family very much and was very proud of each of them. Preceding him in death are his parents and 3 of his siblings: Clifford H. (Colleen) Poulsen, Dawna (Eugene) Hobbs, and Colleen (Darrell) Hadfield. Surviving him are his brother, Scott (Mary Lou) Poulsen, Stan’s wife, Shirley, and their sons, Kirt, Jerry, Greg, and Chad Poulsen and their spouses, as well as, their 11 grandchildren. The family would like to thank the doctors, nurses, and therapists that have been so kind and helpful during Stan’s health issues these past couple of years. Funeral Services will be held at the Wellsville Stake Center on Monday, Sept 23, 2019 at 11 a.m. with a viewing held on Sunday from 6:00 – 8:00 p.m. and prior to the funeral from 9:30 to 10:30 a.m. Interment will be at the Wellsville Cemetery.

The family of Standley James Poulsen created this Life Tributes page to make it easy to share your memories.