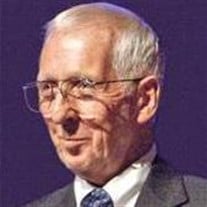 There are countless references to death and dying in theatrical works and the great literature in our lives and world, but none seem appropriate right now. In fact, if one was used, a voice from beyond could most likely be heard saying, &#8220;what... View Obituary & Service Information

The family of Sidney "Sid" G. Perkes created this Life Tributes page to make it easy to share your memories.

There are countless references to death and dying in theatrical...