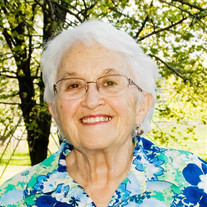 Shirley Ann Reed Henderson, 80, passed away on February 25, 2017 at her home in Providence. She was, no doubt, welcomed home by her husband, Hyrum. Shirley was born on December 30, 1936 to John William Reed and Mabel Goodman Reed in Phoenix, Arizona. She was the first of seven children, with five sisters and one brother. She had a very happy childhood, growing up in Tucson, Gilbert and Mesa, Arizona. She graduated from Mesa High School in 1954. Following high school she attended BYU in Provo where she met her future husband, Hyrum Senn Henderson. They were sealed for time and all eternity on a blistering summer day, August 17, 1957 in the Mesa, Arizona temple. After their marriage, they moved to San Diego, where they lived for 7 years and she graduated from San Diego State in Education. Shirley taught second grade in American Fork for a couple of years and later taught Special Education to severe and profoundly handicapped children at the Exceptional Child Center on the Utah State University campus. She also lived in Flagstaff, Arizona, Ellensburg, Washington and then moved on to Providence, Utah where she lived for her final 43 years. One of her great loves was music. She was very talented at singing and playing the piano and organ. Some of her favorite music were the LDS hymns. She taught piano lessons for many years and had students who benefited greatly from her love of music. Shirley was an excellent cook and shared her love of cooking and canning with her family. No one has ever been able to duplicate her enchiladas and tamales. Shirley was often found with her nose in a book. She enjoyed creative writing as well as reading, and was exceptionally concerned with grammar and spelling. Later in her life, she was a member of the Daughters of the Utah Pioneers and really enjoyed attending those meetings each month. One of her favorite things was learning about and sharing her family history. She was proud of her heritage and loved her family dearly. Shirley was a faithful member of the Church of Jesus Christ of Latter Day Saints and served in various callings in her ward. One of her favorite callings was as a ward choir director. She also served as a temple worker in the Logan LDS temple for several years. She was involved in the extraction of Spanish names for the church as well as serving a Family History mission with Hyrum in her later years at the Logan Tabernacle Family History Library. Shirley is survived by her children, Jeanine H. Senn of South Jordan, Utah; Joseph R. Henderson of Shoshoni, Wyoming; Thomas R. Henderson of Shoshoni, Wyoming; Jody A. Kidman (Greg), of Mendon, Utah; and Rosanne (Greg), of River Heights, Utah. She is survived by her 12 grandchildren and 8 great grandchildren. She will be greatly missed and lovingly remembered by her family and friends. The family would like to express our appreciation to Dr. Bruce Isaacson and to the Logan Regional Hospital Infusion Center for their compassionate care, and to Dr. Josef Prchal of the Huntsman Cancer Center in Salt Lake City. Funeral services will be held Saturday, March 4, 2017 at the Fruitland Acres LDS church, 464 North 300 East in Providence at 11:00 a.m. There will be viewings from 6-8 p.m. on Friday, March 3 and prior to the services on Saturday, March 4 from 9:00-10:30 a.m. Services are under the direction of Cache Valley Mortuary, (435)-787-8415 located in our new location at 80 West 4200 North Hyde Park, Ut 84318.

Shirley Ann Reed Henderson, 80, passed away on February 25, 2017 at her home in Providence. She was, no doubt, welcomed home by her husband, Hyrum. Shirley was born on December 30, 1936 to John William Reed and Mabel Goodman Reed in Phoenix,... View Obituary & Service Information

The family of Shirley Ann Henderson created this Life Tributes page to make it easy to share your memories.