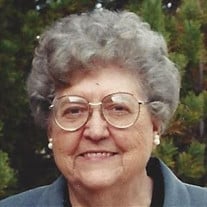 Shirley Ruth Jones Clark (Ruth) 87, died February 26, 2016 in Logan Utah. She passed away peacefully just two weeks prior to her 88th birthday. She was born March 11, 1928 in Wellsville, Utah to Sterling and Melba Gunnel Jones. She attended schools in the south end of Cache valley and graduated from South Cache High School. Mom had the opportunity of living on a farm and experiencing the Great Depression. She learned the value of hard work and frugality. She milked cows, hoed beets, hauled hay and helped her mother. She then attended LDS Business college in Salt Lake City, Utah. After attending college, she worked in Ogden at American First Credit Union, one of it’s first employees. She then met Douglas Clark and they married in the Logan LDS temple, December 4, 1953 and then moved to Clarkston Utah where they resided all their married lives. Douglas passed away September 28, 2005. Mom was a patient and loving companion to our father. Doug and Ruth have four daughters. Marilyn (Curtis) Godfrey of Clarkston Utah, Carol Clark of Taylorsville, Utah, Margaret Clark (stillborn) and Salli (Eric) Miller of Blackfoot Idaho. She also has ten grandchildren, and 23 great grandchildren. Family and the gospel were most important to mom. She served in many positions in her Ward and Stake. Dad and Mom had the opportunity to travel many places especially after Dad retired, but family and friends were always where her heart was. She was happiest to just stay home making dozens of quilts, raising roses, baking bread, and serving others and being a thoughtful hostess. She was a member of the DUP for many years and loved attending the meetings each month. St George became our parent’s winter home for many years. They enjoyed the weather there, getting together with Cache Valley friends and living next to Uncle Max and Aunt Pearl. They looked forward to having visitors from the North visit them in the winter months. Ruth has lived at Legacy House of Logan for two years. She has enjoyed making new friends and the family appreciates the great care she received while residing there. Access Hospice has also helped greatly these last few days. Thanks to everyone. Ruth was preceded in death by her husband Douglas, her parents, daughter Margaret, granddaughter Ginger, brother Mack and sisters Noreen, Margene and Ardith. She is survived by her two brothers , Reid and Charles Jones, the Clark and Jones families, three daughters, grandchildren and great grandchildren who will miss her dearly. Thanks for everything you have done to make our lives so wonderful. We love you dear Mother. Funeral services will be held in Clarkston Utah at the LDS Church, 100 South Main Street Wednesday March 2nd 1200 noon with a viewing prior from 10:30-11:30 AM. A Viewing will also be held Tuesday March 1st from 6:00PM-8:00pm, also at the Clarkston LDS Chapel. Funeral Services are under the direction of Cache Valley Mortuary 3207 North Main North Logan Utah (435)-787-8514. Condolences may be shared online @ www.cvmortuary.com.

The family of Shirley Ruth Clark created this Life Tributes page to make it easy to share your memories.