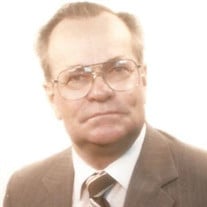 Sharon Y. Bingham, 81, passed away on Oct. 26, 2014 at Sunshine Terrace. He was born to Percy and Audrey Bingham on July 18, 1933 in Logan Utah. He has 3 sisters and 2 brothers . He grew up on a farm in Amalga. He loved to drive tractors, and trucks. He was asked by all the farmers to drive corn trucks after he put in a days work as a plumber. He has lived in Amalga all his life. He served a 2 year mission in England for the Church of Jesus Christ of Latter day saints. He met Renee Leishman on a blind date before his mission. When he returned home he started dating and was married on April 5 1956. He served in the bishopric in Amalga. He lived in a little white house on the farm where he farmed for a while then he got a job as a Plumber. He liked it so he went to plumbing school in Ogden. He got his licenses. He retired as a plumber. He put the sprinkling system in the town park of Amalga. He was the scorekeeper for the Blue Sox Baseball team. He did that for 40 years. He meet many friends while doing that. He loved to cook, and made a salad using dairy product and won first place. It was the Dairy Farmers Wife’s contest. He loved to do Dutch Oven cooking also. He could repair everything and make it work some how. He was known as the neighborhood handyman. He is survived by his wife Renee, four boys and one daughter, Terry (Sandy) Bingham, LaDawn (Jerry) Richins, Curtis (Jackie) Bingham, Darwin (Desiree) Bingham, Nathan (Rindy) Bingham, 21 grandchildren, with one on the way, 21 great-grandchildren with two on the way and one sister Rhonda Bodily and sister-in-law Jessie Bingham. He was preceded in death by his parents, two brothers , Ross Bingham and Scott Bingham, two sisters Blanche Mitton, Gretta Petersen, one grandson Ryan Terry Bingham,A Viewing will be held on Wednesday Oct 29, 2014 from 6-8 pm at the LDS Church, address is 825 North 200 West Logan Utah. A Graveside Service will be held on Thursday Oct 30 2014 at 11:00 am at the Wellsville City Cemetery. Funeral Service under the direction of Cache Valley Mortuary 3207 North Main, North Logan. 435-787-8514. Condolences and memories may be shared with the family at www.cvmortuary.com. Thanks for being the great example you were to us kids. You will be missed greatly We love you DAD. The family would like to thank the staff at Sunshine Terrace.

The family of Sharon Y. Bingham created this Life Tributes page to make it easy to share your memories.