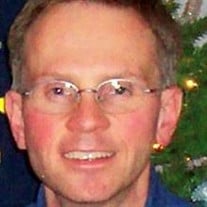 Scott Thomas Carlson passed away December 16, 2015, at home, surrounded by loving family, after a valiant battle with brain cancer. Scott was born to Thomas Dwain and Joyce Peterson Carlson on January 26, 1965, in Logan, Utah. Scott attended grade school through high school in Brigham City, Utah, and graduated from Box Elder High in 1983. Scott was born with various birth defects but overcame the many trials, surgeries, and inconveniences these entailed with a cheerful smile and helping hand. Scott worked most of his life in the grocery business in the Brigham City area. He was the dairy manager at Kent’s Market in Brigham City and in Tremonton for many years where he made numerous friends and his faithful service, attention to detail, and conscientious work ethic paid off. Scott also took a break to drive truck for IFA and worked with his wife at Schreiber’s for a few years, but his heart was in the grocery business. Scott loved to work and help out. As a young man he helped his parents by vacuuming the house, and he loved working on the Benson Farm in Newton with his uncle Lee and family. Scott enjoyed family get-togethers and barbecues around holiday times and enjoyed trips to Denver, Washington, and Las Vegas to see family and friends. Scott never forgot to recognize birthdays, anniversaries, and special occasions of those he loved. Scott served an honorable mission in the Denver Colorado Mission and eventually met his wife Maree Summers on a blind date set up by his Aunt Kathy Benson. They were married in the Logan L.D.S. Temple and enjoyed 21 years of marriage. Scott was blessed with three wonderful sons: Timothy Scott (18), Christopher Thomas (16), and Andrew Summers (14). They were his pride and joy. He set a wonderful example for them to follow for the rest of their lives. Scott was an active member of the Clarkston 2nd Ward where he held various church callings, but his favorites included ward membership clerk and executive secretary; he was also a faithful home teacher. Scott enjoyed classic rock, apple pie, Big Joe Bacon Cheese Burgers from Peach City, and Chevrolets. His cherished car was a Monte Carlo SS that he took pride in driving around to relax and ‘forget about his worries.’ Many thanks to the Senior Wish Foundation and Montego Bay Casino for allowing Scott to drive his beloved Monte Carlo on the Bonneville Salt Flats one last time, after he lost his driving privileges due to being paralyzed with brain cancer. Scott was a firm believer in the Constitution and in defending liberty and freedom. He was a supporter of conservative politics. Captain Moroni was his hero and he had various pictures of him around the house. Scott enjoyed photography, computers, and setting up sound systems and various electronic components for his stereo, television, and computer. Scott is preceded in death by his grandparents H. Weldon Peterson, Elizabeth Hoskin Peterson, and Dwain and Ardeth Carlson; a younger brother, Chad Carlson; his uncles Richard Peterson and Ken Layton; his mother-in-law Verla Summers; and cousins Kimberly Nelson, Cory Benson, Ryan Peterson, and Chris Layton. He also lost a great friend, Royce Munns. Scott is survived by his parents Tom and Joyce Carlson of Brigham City, Utah; his brother Ricky (Dianne) Carlson of Sunset, Utah; his sisters Melanie Carlson of Brigham City, Utah, and Melissa (Darin) Thorson of Chubbuck, Idaho; his wife Maree; his sons Tim, Chris, and Andrew Carlson all of Clarkston, Utah; his father and mother-in-law Vernon and Margot Summers; and his many aunts, uncles, cousins, nieces, and nephews. Special thanks to Schreiber Foods, Kent’s Market, the wonderful people of Clarkston Town and it’s surrounding areas; Huntsman Cancer Center, Dr. Cohen and staff; the U of U Rehabilitation Center, Dr. Edgley and staff; Dr. Jeffrey Lish and staff; CNS Nursing and Hospice and staff, especially “Miss Julie” and “Uncle Larry”; all other therapists, nurses, and “guardian angels” along the way for their donations, time, and love. Everyone who knew and loved Scott will truly miss him. A viewing will be held on Friday, December 18th, from 6:00 p.m. until 8:00 p.m. at the L.D.S. Church in Clarkston. Funeral services will be held on Saturday, December 19th, at noon at the same location. A viewing will be held from 10:30 a.m. until 11:30 a.m. Funeral services are under the direction of Cache Valley Mortuary, 3207 North Main, North Logan, 435-787-8514. Condolences may be given at www.cvmortuary.com. Those who would wish to donate to Scott’s favorite charities may do so to the Wounded Warrior Project at www.woundedwarriorproject.org and the National Brain Tumor Society at braintumor.org.

The family of Scott Thomas Carlson created this Life Tributes page to make it easy to share your memories.