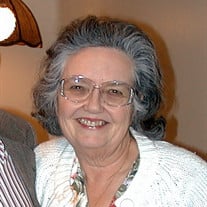 Our sweet step-mother, Sara Jean Davis Bingham, age 82, passed away on October 31, 2018 of heart failure at her home in Amalga, Utah. Sara was born on September 25, 1936 in Raleigh, North Carolina, to Coben and Jeanie B. Davis. She had two younger brothers, Joseph and Richard Davis. After high school, Sara moved to Camarillo, California where she eventually married Dewey Moseley in 1957. They moved to Bouse, Arizona after his retirement from Ventura County Fire Department. After Dewey passed away she married Richard O’Dell in 1987 in Bouse, Arizona. After his passing, she met Rulon Bingham in Parker, Arizona. They were married in 1997 and spent their years together living in Bouse, Arizona in the winter and Amalga, Utah in the summer. Rulon passed away in 2014. Sara was an educated woman who loved to read. She enjoyed handwork, puzzles, and being in the outdoors camping and fishing. She had a delightful southern accent and charm. She was selfless and kind, even angelic by nature. She was also witty, often times with a twinkle in her eye, as we have reminisced of those times we were taken by surprise by her sense of humor. Sara joined the Church of Jesus Christ of Latter-Day-Saints as an adult. She had a strong testimony of the gospel and lived an exemplary life. She enjoyed temple work and family history. Sara was unable to have children of her own, but she was loved and enjoyed by her six step-children: Linda (Jay) Larsen, Mark (Patty) Bingham, Nancy Christenson, Craig (Geraldine) Bingham, Kevin Bingham, Carolyn (Paul) Losee. Sara is survived by her two brothers, six step-children, and her beloved cat Sally. Funeral services will be held on Saturday, November 3, 2018 at noon in the Benson Stake Center in Amalga, Utah. A viewing will be held just prior to the service from 10:30 – 11:30 am, also at the stake center in the Relief Society room. Interment will be in the Smithfield City Cemetery. Services are under the direction of Cache Valley Mortuary. Memories and condolences may be shared with the family at www.cvmortuary.com.

Our sweet step-mother, Sara Jean Davis Bingham, age 82, passed away on October 31, 2018 of heart failure at her home in Amalga, Utah. Sara was born on September 25, 1936 in Raleigh, North Carolina, to Coben and Jeanie B. Davis. She had two younger... View Obituary & Service Information

The family of Sara Jean Bingham created this Life Tributes page to make it easy to share your memories.