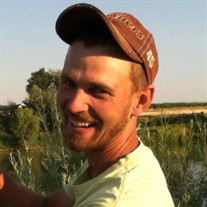 S. MeRell Munson was born June 26th, 1986, in Logan Utah to Stanford & Lori Munson. MeRell was the first son and fourth out of five children to Stanford and Lori. He grew up in Trenton Utah and loved being on the family farm. As a child, that’s where his love for farming started. When he was little, he was out with his father hauling manure with the slurry wagon. His Dad told him to stay in the tractor, and as a curious little boy he didn't listen and ended up behind the slurry wagon. He was covered in cow poop and all anyone could see was the whites of his eyes. He was able to grow up right across the street from his cousins and they were always making memories around the farm. As an adolescent and teen, he worked for Wendell Hansen. Those years were pivotal for MeRell and the Hansen family played a huge roll in his life. He had many great male influences that made a huge impression on him and Wendell was one of the many that helped mold him into the man he became. MeRell was an Eagle Scout and in 2005 Graduated from Sky View High School. He served an Honorable Mission for the Church of Jesus Christ of Latter-day Saints from 2006-2008 In Spokane Washington.  He met his sweetheart Kelsey in the spring of 2011, and they were married in May of 2012. They lived mostly in Amalga as he worked for the Munk Family Farm and in 2019 they moved to Newton where they planned to live and raise their family for the foreseeable future. He lived for the farm and hated to take time off from it. He brought his kids out to ride with him every chance he could. He wanted them to learn the value of hard work and spend as much time with them as possible. He loved his family, God, and country. He beamed what he loved & believed in every single day. Not only did he love the farm but, he loved the Munk Family deeply and was so grateful for everything they did for him and his family. MeRell died doing what he truly loved. So many knew MeRell, and he knew them. While he was driving, you couldn't help but have a brighter day when you passed him, smiling, and waving at you. He loved visiting with people on the farm or when coming home and seeing them out and about in their yards. He would stop to chat or joke about something just to get them to laugh in passing. Often, he called those stops “ministering”. He had a great testimony of the gospel and shared it as often as he could. We always knew he was feeling the spirit when he had tears in his eyes. He never was afraid or ashamed to let them flow. A Statement from his wife Kelsey: “I will miss him naming off people and their connections as we pass them by and wonder how he possibly knew so many people. He always loved to join others at church for the now 4th ward meet and discussion. He loved His Ward family, this wonderful town, and this beautiful Cache Valley. I am broken-hearted for myself, our children, his mom, his siblings, my family, and all our wonderful extended family. Thank you all so much for your outpouring of love! I hope to make him proud and accept the community’s help raising our kiddos. May we be guided by Our Heavenly Father and let him begin to heal our hearts.” MeRell is survived by his wife Kelsey of 9 years. His son BradLee, Daughter Eliza & Son Henry. His Mother Lori Munson, Siblings; Talesha(Curtis)Swainston, Lachelle(David) Jensen, Berena(Jason)Gooch, and Tyson(Erin) Munson, Grandmother Wanda Andrew, Mother-in-law Beverly (Jerry) Godfrey, Brother, and Sisters-in-law; Chance (Kristen) Courter, Flint (Toree) Courter, Shalynn (Josh) Groll, as well as many nieces, nephews, cousins, aunts, and uncles. MeRell was proceeded in death by his Father Stanford Munson. Cousin Matthew Jardine, as well as grandparents, Aunts, and Uncles. Funeral services will be held at the Amalga Utah Stake Center. Viewing Friday, September 17th from 5-7 pm Viewing Saturday, September 18th from 8:30 am-11 am funeral to follow at 12pm-1pm Graveside to follow at Newton, Utah Cemetery immediately after the services. *There will be a memorial table set up to collect memories of MeRell and his hats will be available to be signed. If you feel incline to bring your own hat to be signed, please do so.*

S. MeRell Munson was born June 26th, 1986, in Logan Utah to Stanford & Lori Munson. MeRell was the first son and fourth out of five children to Stanford and Lori. He grew up in Trenton Utah and loved being on the family farm. As a child, that&#8217;s... View Obituary & Service Information

The family of S. MeRell Munson created this Life Tributes page to make it easy to share your memories.