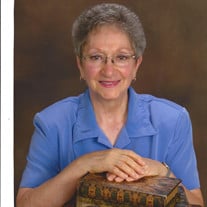 Ruthe Clark (Elna Ruth Clark Norton Stojanovic), age 73, passed away peacefully at her daughter’s home in Logan, UT, on January 8th, 2017. Born November 14th, 1943, in Logan, Utah, to Shirley and Elna Ruth Clark, Ruthe was always a brightly determined spirit. She was a faithful member of the MIA and earned her Golden Gleaner Award, a prize she was always proud to have received. After attending some classes at Utah State University, she married Joel W. Norton in 1963 and they had six children: Joel Cameron, also known as “Little Jody” (stillborn), Leigh Ellyn (Wally Loughney), Daira Jae (Steve Evans), Ruthe Ane (Val Esplin), Dana Reye (deceased), and Tristin Paige (Matt Pinkston). Joel and Ruthe later divorced.Ruthe married Milan Stojanovic in 1993, and he passed away in 2007. Over the course of her life, Ruthe was very active in her Church callings. She served in many capacities in the Young Women’s organization and went on to be a hostess at the Church Office Building and the Conference Center. She served a full-time mission in England, being transferred to Texas after an injury. She considered being a missionary one of her greatest joys and kept all her badges and name tags from her various assignments.Ruthe was extremely creative and enjoyed doing floral design and interior decorating. She worked as a cosmetics consultant, in retail sales, and as a CNA. She was also involved with Amway for many years and enjoyed the friendships she made during that time. She served on the board of the Utah Homeschool Education Association and mentored several families as they began homeschooling. Ruthe’s unique personality made her hard to forget. She was passionate about many things and loved sharing those passions with friends and family. She is survived by her four daughters, thirteen grandchildren (preceded in death by one), and six great-grandchildren. Due to inclement weather, memorial services have been postponed and will be held on Saturday, February 25th, at 1260 N 1600 E in Logan at 11:00 a.m. In lieu of flowers, please donate to the Ruthe Stojanovic Memorial Fund at Deseret First Credit Union.

The family of Ruthe Clark created this Life Tributes page to make it easy to share your memories.