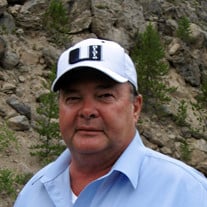 Drew Ross Gordon was born on November 27, 1945 to Ross Hamilton Gordon and Hazel Alma Johnson in Logan, Utah.  He was raised with his 10 siblings on the family farms in Smithfield and Lewiston, Utah. As a young man, he loved playing football and as a leader in his local chapter of Future Farmers of America, he was recognized for showing award winning dairy cows.  Drew graduated from North Cache High School in 1964, immediately following he joined the Utah National Guard where he served honorably for eight years. As a member of the Church of Jesus Christ of Latter-Day Saints, he served a mission in the Eastern Atlantic States.  Upon his return, he married his high school sweetheart, Karen Seamons, in the Logan Temple in December of 1967. Drew and Karen began their lives in Cache Valley before moving to Centerville, Utah where they raised their three children. As a father, Drew spent his time coaching his kids in baseball/softball; taking them camping, deer and duck hunting; and teaching them to waterski at Pine View.  The family’s favorite time together was during their annual trips to Lake Powell. His children have many fond memories of going out for a “treat” with their dad during the one-on-one time they would spend together.  Although Drew and Karen later divorced in 2011, they continued to love and support their family. Drew worked as a maintenance/safety engineer at Kennecott Copper for most of his adult life.  He loved to work with his hands and even started his own construction company, where he taught his children the value of hard work. He is survived by his children, Andrew (Kass), Amanda (Jesse), Nicholas (Anabel), six siblings, 14 grandchildren, and one great-grandchild who were the light of his life.  He is preceded in death by his parents and four siblings (Johnny, George, Lois, and Brent). A viewing will be held at the Cache Valley Mortuary, 80 W 4200 N, Hyde Park, UT 84318 on Saturday, February 23, 2019 from 10:00 to 11:30 am followed by funeral services at 12 pm at the same location. Interment will follow at the Smithfield Cemetery (300 E Center St, Smithfield UT 84335). Funeral Services are under the direction of Cache Valley Mortuary 80 West 4200 North Hyde Park, Utah 435 787 8514. Condolences or memories may be shared on this website.

Drew Ross Gordon was born on November 27, 1945 to Ross Hamilton Gordon and Hazel Alma Johnson in Logan, Utah.  He was raised with his 10 siblings on the family farms in Smithfield and Lewiston, Utah. As a young man, he loved playing football... View Obituary & Service Information

The family of Drew Ross Gordon created this Life Tributes page to make it easy to share your memories.