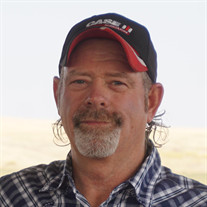 Roger Gordon Jenkins, beloved husband, father, son, grandpa, brother, uncle was welcomed home by our loving Heavenly Father, November 4, 2021. Roger was born on November 4th, 1966 to Gordon and Mary Jenkins in Granger, Utah. Roger started his school years in Salt Lake, and after his fourth grade year his family moved to Newton, Utah to start up a dairy farm. He graduated from Sky View High School and Smithfield Seminary. Roger served a two year mission for the Church of Jesus Christ of Latter-Day Saints in the Christchurch, New Zealand Mission. Roger married Melissa Christensen on February 24, 1994 and was blessed by the birth of Jessie, TJ and Gracie. They were later divorced. Roger married Sara Beth on May 17, 2014. With this marriage came Sara Beth’s three sons, Derek, Wesley and Nathan. Roger has worn many different hats in his working career. One of his favorites was when he and his brother Todd owned Double J Trucking. They enjoyed working together for fifteen years, and hauled gravel and asphalt. In the winter they drove semi’s and hauled pigs from the Canadian border to Lehi. Roger has always done what he loved most of all, which is farming. He really loved being able to farm side by side with his son TJ, brother Todd, Dad and Grandpa. Roger has always had a passion for anything with a motor. He loved riding his dirt bike and even got into dirt bike racing. He also enjoyed snowmobiling and driving in the demolition derby. Most recently Roger and Sara Beth would take evening rides on the road bike which they loved doing together. Roger has always had a passion for food. He was always looking in the fridge to see what was inside. As he grew older he realized how much he loved to cook. He loved watching cooking shows to see what new things he could make. He had a knack for making everything taste delicious. Roger started at an early age liking sports. He started pitching the full game of baseball at a young age. He also loved playing football and started with little league and ended with playing on the Sky View High School team. Roger treasured his family and all the time and memories they created together. His children and grandchildren are his proudest achievements and legacy. He will be forever missed and never forgotten by those he touched. Roger was preceded in death by his Grandparents Golden and LaVerne Rigby and Ora and LeOra Jenkins, stepson Derek Seamons and his in-laws Robert & Carol Bodily. He is survived by his wife Sara Beth and his children Jessie (Colton) Johns, TJ Jenkins, Gracie Jenkins, Wesley (Erica) Lowe, and Nathan Lowe. Grandchildren Daxtyn & Camdyn Johns. His Parents Gordon and Mary Jenkins. His siblings Debbie (Mike) Walquist, Kathy (Jed) Christiansen, Angie (Chad) Ransbottom, Todd Jenkins and many nieces and nephews. There will be a viewing at The Church of Jesus Christ of Latter Day Saints meeting house in Newton UT, on Wednesday November 10th, 2021 from 6-8 pm at 12 South 100 West. On Thursday November 11th, 2021 the viewing will be from 9:30-10:30am and the Funeral will be at 11:00am at the same location. The interment will be at the Newton Cemetery.

The family of Roger Gordon Jenkins created this Life Tributes page to make it easy to share your memories.