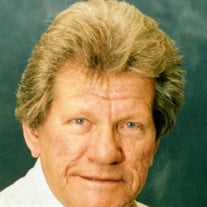 Robert Clayne Petersen, born Aug 16, 1939 in Clarkston, UT returned home to his Heavenly Father and Jesus Christ on Sat May 20, 2017 surrounded by family at his home in Las Vegas, NV. As a servant of the Lord, he dedicated his life to serving... View Obituary & Service Information

The family of Robert Clayne Petersen created this Life Tributes page to make it easy to share your memories.