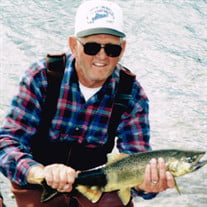 Paul Isaac Douglass, 79, died of causes incident to age Sept 28, 2015. Paul was born on Sept 3rd, 1936 to Glenn and Louise Douglass. He was the third of seven children. He graduated from North Cache High School 1954. He worked in various occupations before beginning his career as a Civilian Employee at Hill Air Force Base. He worked as an equipment specialist with the F-16 Fighter Jets. He worked there for 26 years before his retirement. Paul was briefly married and later divorced. His son, Tony, came from this marriage. Paul then met Cynthia Jean Summers of Avon. They were sealed in the Logan LDS Temple on June 7, 1963. Paul and Jean had three sons together; Kirk, Nick and Danny. They lived together in Smithfield, Utah for 52 wonderful years. Paul was a faithful member of the LDS church and served in many different capacities, such as a temple worker, member of the bishopric, high priest group leader, and worked with the Young Men groups for many years. Paul loved the outdoors. He loved to fish, hunt, camp, and to go four wheeling. He enjoyed spending these times with his family. He and Jean were known to make many trips to Jackson Hole to enjoy the Tetons and look for moose. Paul spent many seasons coaching Little League Football and Baseball. Paul loved sports and most of all he loved the Aggies. Utah State has lost one of it’s most loyal and faithful fans they have ever had. The only thing that could keep him from an Aggie football or basketball game would be to attend one of his kids or grandkids events. Paul was a talented singer and enjoyed singing in the church choir. He later sang in the Cache Valley Barbershop Chorus as well as with the ‘Out of Cache’ barbershop quartet. Paul was preceded in death by his parents and by his three brothers, Billy, Larry, and Scott. He is survived by his wife Jean; his children; Tony (Ruby) of Smithfield, Kirk (Kristie) of Willard, Nick of Smithfield, and Danny (Brenae) of Hyde Park. He has 12 grandchildren and 3 great grandchildren. Funeral services will be held on Friday, Oct 2, 2015 at 11:00 am in the Smithfield 21st Ward Chapel, 345 East 300 South, Smithfield, Utah. A viewing will be held prior to the funeral from 9:30 am – 10:30 am in the church. A viewing will also be held the night prior to the funeral on Thursday, Oct 1, 2015 at the church from 6:00-8:00 PM. Interment will be in the Smithfield City Cemetery.

Paul Isaac Douglass, 79, died of causes incident to age Sept 28, 2015. Paul was born on Sept 3rd, 1936 to Glenn and Louise Douglass. He was the third of seven children. He graduated from North Cache High School 1954. He worked in various... View Obituary & Service Information

The family of Paul Isaac Douglass created this Life Tributes page to make it easy to share your memories.