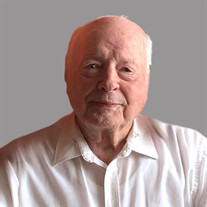 Osmer Nyal Baker of Cornish, Utah returned to the loving arms of his Heavenly Father on April 4th 2021. He was born March 6th 1929 in Iona, Idaho to Osmer Abraham Baker and Jennett Glenn Perkins. He was the third of 11 children in his family. He grew up during the great depression so he learned how to work hard at a very early age. His father suffered from poor health, so as a very young boy he would work odd jobs, including a paper route, to help support his family. He would happily turn his paychecks over to his mother. As a teenager he continued to work hard to help support the family. He would help his father grow watermelons, bees for honey, and goats to sell. Saving a little from each check to save up to buy a car, which he later sold to buy his high school sweetheart, Myrna McCollum, a wedding ring set. They were sealed in the Mesa Arizona Temple on June 4th 1947. He served in the United States Navy during the late 1940’s and was honorably discharged. Together Osmer and Myrna raised 6 children.  He continued to work hard to now support his own family, sometimes working 3 jobs at once, so our mom could stay home and raise us kids. He was a devoted member of the Church of Jesus Christ of Latter-day Saints. He served 3 missions to the Ruskin Florida area for a total of 5 years. He diligently served in many church callings including 2nd counselor to the Branch President while on his mission. He was also a home teacher while on his mission to 21 of the ward families which he visited monthly. He enjoyed all his opportunities to serve, but the one he loved the most was his calling as a husband and father. Our dad loved working with his hands, building anything from a house to recently building a pantry in his daughter Shirley’s home. He had her and his son in law Doug working right along his side teaching them along the way. The outcome was beautiful. Not just the pantry but the lasting memories and his shared knowledge and skills. He was a fixer of anything broken. If it didn’t work we didn’t throw it away, we just gave it to dad and he would fix it or redo it and it would be good as new. He had an amazing skill in mechanics and used this skill to support his family. He would be sent all over the country to fix the large presses and other machinery at different Alcoa Plants after others had tried, but failed to fix them. He would come in, almost immediately see the problem, and get it running again. He worked many jobs, but the 32 years at Alcoa Aluminum was his opportunity to really use his talents and skills and make a lot of friends. He retired from there in 1991 as a Superintendent of Maintenance. He is a man of great integrity, his word was his bond. If he said he would do something for you, you could count on it getting done ahead of schedule. He taught his children honesty, the value of hard work, and service. He gave us the gift of growing up in a loving and secure home. Osmer and Myrna are the parents of 7 children, Karen Wiegman, Osmer Michael Baker, David (Debbie) Baker, Daniel Baker, Timothy (Lisa) Baker, Shirley (Doug) Littlefield, Shonna (Bill) Russell. Their family continues to grow with 21 grandchildren, 47 great grandchildren and 7 great great grandchildren.

Osmer Nyal Baker of Cornish, Utah returned to the loving arms of his Heavenly Father on April 4th 2021. He was born March 6th 1929 in Iona, Idaho to Osmer Abraham Baker and Jennett Glenn Perkins. He was the third of 11 children in his family.... View Obituary & Service Information

The family of Osmer Nyal Baker created this Life Tributes page to make it easy to share your memories.