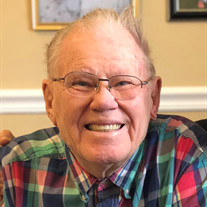 Odes Lee Ross April 26, 1931 – January 1, 2019 Odes Lee Ross, 87, passed away peacefully in Logan, Utah on January 1, 2019. Odes was born April 26, 1931 in Athens, Georgia to William Harrison Ross and Lola Lee (Collins) Ross. Odes was the youngest of five boys. The family lived in an old farm house in Attica, Georgia with no running water. The family farmed cotton using mules. At age 17 Odes moved from Georgia to La Jara, Colorado. There he was drafted into the U.S. Army serving from 1952 to 1954 in the Korean conflict as a Private 1st Class. Odes received the following honors: – Combat Infantry Badge – Korean Service Medal with 1 bronze service star – Republic of Korea Presidential Unit Citation – National Defense Service Medal – United Nations Service Medal – Good Conduct Medal Upon an honorable discharge, Odes returned to Colorado and worked at the Rural Electric Cooperative doing lineman work. Latter-day Saint missionaries in Pueblo, Colorado introduced Odes to a young college intern, Carla Fern Nelson. One month later they were married on August 18, 1955 in the Salt Lake LDS Temple. Although they later divorced in 1993 Odes and Carla maintained a close friendship. Shortly after marrying Carla, Odes attended Emily Griffith Opportunity School in Denver and studied welding, while working as a custodian at night. During their time in Denver they had their first two children, Julie and George. In 1959 they moved their young family to Santaquin, Utah. While in Santaquin, Odes continued studying welding and earned a GED at Central Utah Vocational School (now UVU). Odes and Carla later settled in Orem, Utah where they had three more children, John, Mary Ellen, and Lola, and lived for 28 years. Having completed his education, Odes was employed at Bonham Corporation which manufactured the “Tote Gote” off-road motorcycle, Pacific States Steel, Utah State Road Department, and then Geneva Steel. Odes enjoyed working at Geneva Steel and retired after 23 years, working in railroad, general maintenance, the blast furnace, the burning table, the brick gang in the open hearth, as a crane hooker, and the machine shop. Odes’s Georgia roots ran deep. His southern accent never completely left him and his love for southern cooking stayed with him. To his delight, he was treated to his sister-in-law Thelma’s homemade biscuits and gravy every morning, grits everyday, and fried okra during his last visit to Georgia in 2011. One thing that Odes loved to talk about was old cars. He taught his sons at a young age to fix and maintain cars. Just a few years ago George took Odes to a vintage car show in Logan. Even then he could still name the make and model of nearly every car. Throughout his life Odes was a faithful member of the Church of Jesus Christ of Latter-day Saints and raised his family in the gospel. He adored his family and relatives and loved to talk about how they were all doing. Odes always enjoyed hearing the wonderful things that were going on in their lives. Odes was preceded in death by his parents, William and Lola Ross, and a grandson, Skyler Otis Hamilton. Odes is survived by his children Julie Hamilton-Schutte (Dave), George Ross (Lori), John Ross (Kathy), Mary Ellen Beers (Robert), Lola Lloyd (David), 17 grandchildren, and 14 great-grandchildren. The family wishes to thank the caregivers of Sunshine Terrace Foundation and Hospice and Dr. Jeffrey Huffman for the love and kind care given to Odes. A funeral service will be held on Saturday, January 5th at 12:00 p.m. noon at Goshen Town LDS church, with a viewing from 10:30 a.m. to 11:30 a.m. A burial service will follow at the Goshen Town Cemetery. The family wishes to also thank American Legion Post #124 for honoring Odes with military rites. Funeral services are under the direction of Cache Valley Mortuary 80 W 4200 N Hyde Park, Utah (435) 787 8514. Share your condolences on this website.

The family of Odes Lee Ross created this Life Tributes page to make it easy to share your memories.