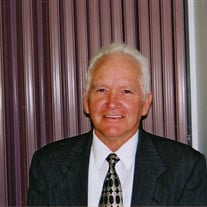 Norris Kimball Arnold passed away peacefully on November 8, 2018 surrounded by his family. Norris was born on January 10, 1936 in Monroe, Utah, to Charles LeRoy Arnold and Martha Ruby Jensen. He was the third of five children. He was raised to “work all day and sleep all night,” and shared this principle with his children and grandchildren as he continued the tradition of farming. He remembered playing baseball in grade school and learned to play basketball as he got a little older. He was also an avid bowler. He loved the world of agriculture and raised animals his whole life. He won the Chicken of Tomorrow contest in 1952, and he continued to win animal competitions for decades. He had hog farms in Monroe, Lehi, St. John, and Clarkston, Utah. A lifelong member of the Church of Jesus Christ of Latter-day Saints, he served his fellow man in many capacities. He was taught “Be a work horse, not a show horse!” with the Lord’s work. He served an LDS mission to Denmark, Copenhagen, from 1956 to 1958. He was later a high counselor and bishop, and he encouraged many young men to serve missions. Norris was also an active member of his community; he was a town councilman for Clarkston City for four years. The community appreciated him, and he was chosen to be Citizen of the Year in 2014. A farmer through and through, Norris always worked very hard. The hog farms he built were an important part of Norris’ life and those of his family. He used his farms to teach his children and grandchildren. There are many stories about “the farm” that will continue long after the equipment has disappeared! His posterity inherited his work ethic and perseverance. Norris married Ragnhild Elise Hendriksen on October 4, 1958 in Copenhagen, Denmark. They had 4 children: Roy Norris Arnold, Elaine Esther Arnold, Tina Elise Arnold and Kim Marie Arnold. Following a divorce, he married Thelma (Bunny) Clydene Clark on June 21, 1980 in St John, Utah. He adopted her two sons, Scott Clark Arnold and Kenneth Bruce Arnold. Bunny has lovingly cared for Norris for many years, and she ensured that his last ones on earth were as comfortable as possible. He is preceded in death by his parents, brothers Kay and Jon, and granddaughter Noel. He is survived by his wife, Bunny, children Roy (Joy) Arnold, Elaine (Ron) Pomikala, Tina (Darin) Evans, Kim (Nathan) Shumway, Scott (Cindi) Arnold and Ken (Aleisa) Arnold, and 25 grandchildren and 4 great-grandchildren, with 3 more on the way. Services will be held Saturday, November 10, 2018 at the Clarkston LDS Chapel, viewing from 9:30-10:30, funeral at 11:00.

Norris Kimball Arnold passed away peacefully on November 8, 2018 surrounded by his family. Norris was born on January 10, 1936 in Monroe, Utah, to Charles LeRoy Arnold and Martha Ruby Jensen. He was the third of five children. He was raised... View Obituary & Service Information

The family of Norris Kimball Arnold created this Life Tributes page to make it easy to share your memories.