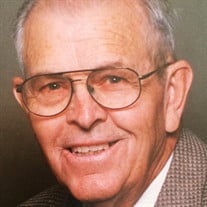 J Murray Rigby passed away February 5th, 2016 at Legacy House in Logan, one week after his 70th Wedding Anniversary. He was born on October 18th, 1925 to David L and Florence Merrill Rigby in Newton, Utah.Murray joined the Navy and was stationed in the Pacific during WWII.He married Arlene Traveller on January 30th, 1946 while on leave. On his return from the war, he finished his education at Utah State University. Murray began his teaching career in 1951 and taught at Garland, Trenton, Newton and Lewiston. He was a principal at Trenton, Newton, Lewiston, Summit and North Park. He was a beloved teacher and principal to thousands of students. He retired from Cache County School District in 1985 after 34 years in the profession. He lived most of his life in Newton and he still called Newton home. They raised their family on the family farm while teaching them how to work. All the while Murray was still teaching.Murray served as Mayor of Newton for two terms, and was the President of the Mayors Association. He served in many church callings including Bishop, High Council and in the Stake Presidency. Arlene and Murray were also Temple workers for a number of years.Murray is survived by his wife Arlene Traveller and by his Children Richard (Chris) Boise, ID, Jeanine (David) Nilson, Fruit Heights, UT, Mark (Diane) Newton, Utah and Randy (Jeannette) Newton, UT. They have 18 grandchildren, 52 great grandchildren and 1 great great grandchild, brother-in-law Don Shelton and sister-in-law Jeannie Rigby.He was preceded in death by his parents, son Craig Rigby, brother William (Bill) F. Rigby, sister Marilyn Shelton and great grandson Braxton Saunders.Funeral service will be held Friday February 12th, 2016 at 12:00 p.m. in the Newton 1st Ward Chapel, 90 S 100 W, Newton, Utah. A viewing will be held Thursday at the Newton 1st Ward from 6:00 p.m.-8:00p.m. A viewing also will be prior to the services 10:30 p.m. – 11:30 p.m. Interment will be at the Newton Cemetery.The family would like to thank all who cared for him and appreciate Legacy House and Hospice. We also want Mom to know how much we appreciate her for all the care and devotion that she rendered to Dad.We thank Dad for his exemplary example to us and all he came into contact with he truly was a gentleman.Services are under the direction of Cache Valley Mortuary, (435)787-8514 , 3207 N Main street North Logan Ut. Condolences may be shared online @ www.cvmortuary.com.In lieu of flowers the family suggests that contributions can be made to the Perpetual Education Fund of the LDS Church.

J Murray Rigby passed away February 5th, 2016 at Legacy House in Logan, one week after his 70th Wedding Anniversary. He was born on October 18th, 1925 to David L and Florence Merrill Rigby in Newton, Utah.Murray joined the Navy and was stationed... View Obituary & Service Information

The family of Murray Rigby created this Life Tributes page to make it easy to share your memories.