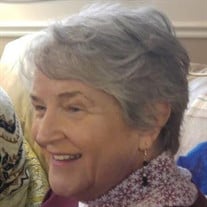 Montie Rae Brunson Jones passed away in Logan, Utah at the age of seventy-nine on January 22, 2022. Monti was born August 27, 1942 in Salt Lake City, UT. She attended East High School, and graduated from the University of Utah with a bachelor's degree in Musicology. Though she and Gregory Walter Jones followed one another as their families moved three times into the same neighborhoods on Salt Lake’s east side and they shared some common friends, they didn’t go out until their parents' last move, three houses away from one another. They began talking about marriage after their second date, in the summer of 1965. Greg and Monti married on December 28, 1966 in the Logan Temple. Monti was cheerful, caring, generous, loving, calm, and dedicated to the Lord. She could talk to anyone, from a homeless woman in the New York City metro to every single person in the foyer after church. She dearly loved her six children and showed that love through sewing costumes then dance dresses, then wedding dresses; baking cookies and caramels and raspberry jam; providing lifelong calming encouragement, and dragging them along to museums, historical sites, and natural wonders in nearly every US state on summer road trips in their brown 1980 Dodge Ram van. She loved being outside. She loved morning walks with friends, and occasionally family, and loved naps in the afternoon. Dinnertime in the summer was often served well into the evening because she wanted to get “just a little more done” in the yard before dark. She could never find her keys. Monti wholeheartedly served in the community as an officer of the PTA at the local, county, and state levels; as a volunteer with the Lions Club and League of Women Voters; a member and officer of the Daughters of Utah Pioneers; and as a two time candidate for public office at the county and state levels. She and Greg served three full-time missions for the Church of Jesus Christ of Latter-Day Saints, one in Brazil and two in Spain. She also served as an ordinance worker in the Logan Temple, a Family History consultant, Gospel Doctrine teacher, Young Women's advisor, and as a Primary and Relief Society president. She had the unique perspective of one who had experienced many cultures and regions of the world including Salt Lake City, New York, Boston, Los Angeles, Caracas, Sao Paulo, Madrid, and Cache Valley. Her husband and family will miss her tremendously, but her suffering over the last few months has come to a welcomed end. The thoughtful staff at Rocky Mountain Care were glad to give service to a woman who they felt was a joy to be around. She had a smile and a welcome for everyone who crossed her path. Monti is preceded in death by her grandparents and parents, German Ellsworth Brunson and Lena Mangum Brunson. Survived by her husband and her six children: David (Nicola) Jones of McLean, Virginia; Jane (Michael) Waring of Tehachapi, California; Rebecca (Taber) Johnson of Karben, Germany; Miriam (Nathan) White of Providence, Utah; Peter (Camille) Jones, of Lexington, Massachusetts; and Michael (Elizabeth) Jones of Smithfield, Utah. She is also survived by twenty-three grandchildren and one great-grandson. Funeral services will be held at the Providence Canyon Ward meeting house, 360 East 450 North, MILLVILLE, Utah. The funeral will be at 1:00 pm on Saturday, January 29, with a viewing at the church from 11:00 to 12:30. The service will be streamed at: https://youtu.be/BPKqVPxIscM and will be available at the same link for a few weeks after.

Montie Rae Brunson Jones passed away in Logan, Utah at the age of seventy-nine on January 22, 2022. Monti was born August 27, 1942 in Salt Lake City, UT. She attended East High School, and graduated from the University of Utah with a bachelor's... View Obituary & Service Information

The family of Montie Rae Brunson Jones created this Life Tributes page to make it easy to share your memories.

Montie Rae Brunson Jones passed away in Logan, Utah at the age...