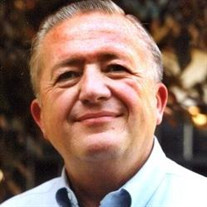 1937-2016 Milton Johnson Morris passed away September 17, 2016 following complications of a long-term illness. Milt was born September 25, 1937, in Richfield, Utah, the son of Andrew Leroy Morris and Gayl Johnson Morris. His parents relocated to Murray, Utah where Milt attended grade school and Murray High School. He was a graduate of the University of Utah, majoring in Marketing and Advertising and served as Editor in Chief of the Utonion, the university yearbook and head of the Publications Counsel. He was a member of Pi Kappa Alpha Fraternity, On March 15, 1962 he married Gayle Simmons in the Salt Lake Temple. He subsequently attended law school at the "U," where he served with distinction in Law Review and Student Government, and graduated with the top of his class. Milt enjoyed his career as a telecommunications attorney, working for many years at Pacific Telephone and AT&T. He was a lead attorney on the rate cases in the early 1980s that led to the breakup of the Bell Telephone system. In 1987 he took early retirement from AT&T, leaving as Vice President and Associate General Counsel in charge of the Western Region of the United States. His time with PacBell and AT&T took him and his family to Southern California, New York, the San Francisco Bay Area (twice) and New Jersey. Following his AT&T career, Milt was a partner with several law firms in Salt Lake City, then as general counsel for businesses with operations in Seattle, Sacramento, Mongolia, and mainland China. In 2004, he and Gayle went with the B.Y.U. China Teachers Program to teach at Tonji University in Shanghai, China. Milt taught advanced business English classes as well as classes in American law at Fudan University. Following two years in Shaghai, Milt and Gayle settled in Smithfield, Utah. He was a faithful member of the Church of Jesus Christ of Latter-day Saints. He served a full-time mission to Hong Kong and two Stake missions. He was a High Counselor, a member of a Stake Presidency and many other church callings. He especially loved to teach the gospel and share his testimony of the plan of salvation. Milt is survived by his wife of 54 years, Gayle, and their four children: Brian (Keri), Dave (Suzanne), Gayl Anne Morris, and Lauren (Kevin) Shanley. Milt and Gayle enjoyed their grandchildren as well: Andrew (AJ.), Carolynn, Taylor (Megan), Tanner (Anthony), Erin, and Ethan Morris, and Kyle and Jessica Shanley. He is further survived by his brother Willard Richard (Janell), and brother-in law Thomas Reid Simmons (Roberta) and their children. Services will be held on Tuesday, September 27,2016, at the Smithfield 14th Ward meetinghouse, 451 South 250 East, Smithfield, Utah. A viewing will be from 10:30 to 11 :00 A.M. prior to the funeral at 12:00 P.M. Burial will be in the Aurora, Utah Cemetery at 2:00 P.M. on Wednesday, September 28,2016.

The family of Milton Johnson Morris created this Life Tributes page to make it easy to share your memories.