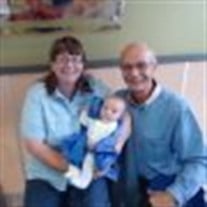 Clarkston - Michael Eugene Miller, 67, of Clarkston Utah, passed away on Sunday, July 27, 2014. He was born to Louis Ellis and Jack Miller, May 17, 1947, in Driggs, Idaho. He grew up in Teton Valley and later served an honorable mission in Belgium. Mike married Jody Miller on June 24, 1970 in the Idaho Falls Temple and they raised three head strong kids together; Beckie, Ben and Nic. He spent 21 yrs of his career in the Air Force. Mike also worked for the Forrest Service, Juniper Systems and was currently the Weed Foreman for Box Elder County. He and his family resided in Clarkston, Utah.Hiking, camping, canoeing, horseback riding, cross-country skiing, woodworking and jogging were some of his favorite hobbies. He was a proud member of the Near Trailus Hiking club where he served as the founder, trail guide and the sergeant of arms. He served faithfully in the LDS church by fulfilling callings such as High Council, bishopric and Stake auditor. Mike also held a position in the planning and zoning for the city of Clarkson. Mike was the best husband, father, son, brother, Granddad and uncle. He had a passion for teaching and talking to people. He will always be remembered for his love of nature, the gospel, and was the best example to us all. He will be cherished in our hearts forever.Mike is survived by his sweetheart, Jody Miller of Clarkston, Utah and three children. Beckie his daughter and her husband Trent Caverhill of Clarkston, Utah have six children; Jacob Yonk, Merrisah Yonk, Kade Caverhill, Koral Yonk, Kody Caverhill and Beth Yonk. His oldest son, Ben Miller and his wife Kia Miller-Suddarth of Boise, Idaho have five children; Chyne Miller-Suddarth, Malikai Miller, Calvin Michael Miller, Desmond Miller and Elliot Miller. His youngest son is Nic Miller resides in Smithfield, Utah. Mike will also be missed by his brother Jim Miller, sister Lyn Olsen, sister Kathy Edwards, sister Mitzi Reynolds, sister Dorothy Thomas, sister Lisa McCauley and his little sister Tami Ellis who is with him now.

Clarkston - Michael Eugene Miller, 67, of Clarkston Utah, passed away on Sunday, July 27, 2014. He was born to Louis Ellis and Jack Miller, May 17, 1947, in Driggs, Idaho. He grew up in Teton Valley and later served an honorable mission in... View Obituary & Service Information

The family of Michael Eugene Miller created this Life Tributes page to make it easy to share your memories.