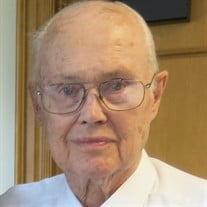 Max LeRoy Cooley passed away at home on Thursday, May 26, 2016. He was born in Newton, UT on February 1, 1932 to Walter LeRoy Cooley and Wilma Larsen Cooley. Max grew up on the family farm as the oldest of five children. He graduated from North Cache High School in 1950, where he was active in sports and student government. Max was drafted during the Korean War and served in the U.S. Navy. After his military service, he accepted an LDS mission call to serve in the Northern States Mission with headquarters in Chicago, IL. Max met his eternal companion, Cora Hansen, on a blind date while attending Utah State University. They were married on September 17, 1960, in the Manti, UT temple. They continued their education and both graduated from USU in Elementary Education. Max taught at Summit Elementary in Smithfield and then was principal of Newton Elementary School before accepting an assistant scholarship at Indiana University in Bloomington, IN, where he received his MS and EDS degrees in Instructional Media Education. After teaching one year each in Las Vegas, Heber City, and Box Elder school districts, Max and Cora were able return to Newton with their four children. Max then worked at Logan High School for 28 years as the media specialist until he retired in 1999. Max was active in the LDS Church all of his life and served in many callings including a regional 70, member of the High Council, and Gospel Doctrine teacher. Some of “Gramps” favorite pastimes were attending USU football and basketball games, filling his children and grandchildren’s minds with knowledge, and telling amazing stories. In the summertime he could be found outside working in the yard and in the fall he could be found hunting. Max is survived by his wife Cora, his four children, Allan Cooley (Kristie), Pamela Hill, Laura Welch (Shawn), Lana Lish (Steve, deceased); fourteen grandchildren and 10 great grandchildren; and his siblings Norris, Doris, Val and Elaine. Services will be held Wednesday June 1st at 12:00 p.m. in the Newton LDS Church located at 100 West 50 South. A viewing will be held Tuesday, May 31 at the Newton LDS Church from 6 p.m. – 8 p.m., and Wednesday, June 1st from 10:30 a.m. - 11:30 a.m. Interment will be in the Newton Cemetery. We express a special thank you to his home healthcare nurse, Melisa, for all of her dedicated care.

Max LeRoy Cooley passed away at home on Thursday, May 26, 2016. He was born in Newton, UT on February 1, 1932 to Walter LeRoy Cooley and Wilma Larsen Cooley. Max grew up on the family farm as the oldest of five children. He graduated from North... View Obituary & Service Information

The family of Max L Cooley created this Life Tributes page to make it easy to share your memories.