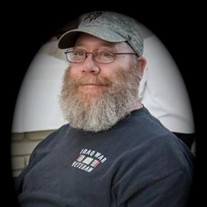 Mathew Charles Wertman, son of Keith Charles and Ruth Bright Wertman passed away from complications due to Covid on December 18, 2021 at the Murray IHC hospital in Murray Utah. Mathew was born January 17, 1961, in Nuremberg, Germany, where his father was stationed at the time while serving in the United States Army. Mathew grew up in Logan, Utah where he graduated from Logan High School. His school attendance was questionable at times. Eventually his dad started taking him to school and dropping him off in front of the building in person. Mathew went in the front door and right out the back. His dad was a police officer for Logan City, so he always knew what Mat and his friends had been up to before they got home. So, Mat continued his shenanigans in the county, where it took his dad longer to find out. His fondest memories were of fishing with his grandpa Bright and camping with the family. One camping trip in particular was at Bear Lake for the 4th of July. Naturally a trip was made out of town so they could get the “good” fireworks. Mat and his brother, Warren, were in charge of the firework display that night; and as luck would have it a firework tipped over and they ended up being chased down the beach by a very hot rocket. While they were alive, Mat spent the weekends in Richmond helping his grandma and grandpa Bright. He has warm memories of his grandparents and their influence lasted the rest of his life. Mathew joined the Army the day after his high school graduation in 1979. The military became a way of life for him. During a training exercise Mat was injured. While home, recovering from his injury, Mat met Loy Jean Walker. He wanted her to dance with him and she said “no, I have other plans”. He was so intrigued that a girl told him no but he kept up the chase. Two weeks later he asked her to marry him. They were married March 8, 1986 in Elko, Nevada. Their marriage was later solemnized in the Logan Utah Temple and in 1990 they moved to Richmond Utah. Mat joined the Utah National Guard where he was eventually promoted to Staff Sergeant. He served in Iraq with the 1/148. Mat and Loy Jean were deeply blessed with three incredible daughters; Dezaraye, Tana, and Shannon. He cherished them with everything he had. One of the most tender moments his wife remembers of him is when he would come home from a weekend training. He would sit on the floor, still in uniform, and start dressing Barbies with his girls. Mat often worked 2 jobs to support his family; yet he never missed a dance recital, concert, or fishing trip with his girls. Mat is survived by his wife, Loy Jean, and two daughters, Jesse Dezaraye and Shannon Wertman, his brother, Rodney Bybee, (Susan deceased), Geary (Marsha) Bybee, Warren (Valerie) Wertman, Debra (Levi) Higley, Angela Wertman and a very special niece, Kory (Dave) Freeze. He was preceded in death by a daughter, Tana Lee Wertman, his parents, Keith and Ruth Bright Wertman, and sister Sandra Jane.

Mathew Charles Wertman, son of Keith Charles and Ruth Bright Wertman passed away from complications due to Covid on December 18, 2021 at the Murray IHC hospital in Murray Utah. Mathew was born January 17, 1961, in Nuremberg, Germany, where... View Obituary & Service Information

The family of Mathew Charles Wertman created this Life Tributes page to make it easy to share your memories.