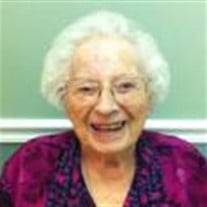 Mary Baron 01/13/1915 - 01/02/2016Mary H Baron, fondly known as "Nana", passed away peacefully of natural causes on Jan. 2, 2016, just eleven days before her 101st birthday. She was born in Moundsville, West Virginia, the oldest child of Frances Guzel Reven and Thomas Reven. She had two younger brothers, John and Charlie, both deceased. She married her sweetheart John, on Oct. 27, 1934. They had 63 years together until his death in 1997. They moved to California in 1956, then to Utah in 1995 to be closer to their family. Together they enjoyed going on cruises, camping with the Good Sam Club and dancing. She had the pleasure of dancing with Lawrence Welk at one of his shows. She enjoyed spending time with her family.She is survived by her son Eugene (Rose); four grandchildren: Linda Conover, Ogden, UT; Cynthia Storme, Scottsdale, AZ; Diana Taylor, (Robb), Logan, UT; Eugene Baron, (Jennifer) Ottumwa, IA. Six great grandchildren; Chayo Jensen; B.J. Buttars, (Kylie); Payton Buttars, (Julie); Samantha Storme; Mikell Baron; Devon Baron: three great great grandchildren, Justice, Jay Vaughn, Eva, and one due in June. She is also survived by a sister-in-law Ann Reven. We would like to thank Dr. Michael Stones, Autumn Care, and CNS Hospice for their compassionate care.She was laid to rest Monday, Jan. 4, 2016, at Logan Cemetery. Funeral arrangements were made by Cache Valley Mortuary. Condolences may be shared at www.cvmortuary.com

The family of Mary Helen Baron created this Life Tributes page to make it easy to share your memories.