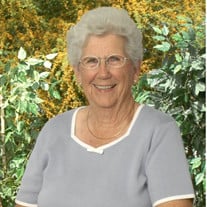 Mary Fuhriman Griffin November 16, 1926 – June 15, 2019 Mary Fuhriman Griffin, age 92 passed away June 15 2019, at Maples Springs Assisted Living Center in Logan, Utah, with family by her side. She was born on November 16, 1926 in Providence, Utah to Lavon and Mamie Fuhriman, Mary attended Cache Valley schools and graduated from South Cache High after which she attended USU where she met Earl Griffin of Clarkston, who had recently served in World War II. After an enchanting courtship they were married in the Logan Temple on March 19, 1947. Mary has three siblings: Gayla (Marvin) Green, Rhonda (Bill) Farnsworth, and Dean (Anna) Fuhriman. Mary and her husband Earl have seven children; Gary (Nancy), Mary Ann (Trace Skeen), Janet (Dave Smith), Yevon (Rick Romney), Paul (DeNae), Lauralee (Mike Jensen) and Carol (Jon Searle). She also has 23 grand-children, 47 great grand-children, and one great-great-grandchild who love her dearly. After Earl graduated from USU he accepted a teaching job in Rupert, Idaho where they lived on a small farm outside of town. They loved the country life and enjoyed working with their children in the garden and caring for the crops. All of the Griffin children have followed the example of their parents and have served in church leadership positions and been active in civic and humanitarian activities throughout their lives. Mary had the wonderful opportunity to host many LDS general authorities in her home during their visits to the Rupert Idaho Stake. She loved to cook wonderful meals for them and entertain them in her home which she always maintained in painstaking fashion. Mary tenderly nursed her husband Earl through a difficult bout of cancer until he passed away in 1983. Following her husbands’ death, she returned to her native Cache County. She married Darwin Petersen in 1991 and they alternated residence between Mesa, AZ and Logan. Darwin became ill and once again Mary nursed him through to his passing in 1996. Mary then married David Erickson from Scottsdale, Arizona. They later served an 18-month mission at the LDS Temple in London, England. They enjoyed travel and playing tennis until he became ill at which time Mary tenderly nursed him through to his death in 2012. Mary’s greatest passion was her children and grand-children and she enjoyed reciting poetry to them along with playing cards and putting puzzles together. She never a saw a cross-word puzzle that she didn’t want to conquer. Although unable to communicate, we know Mary was aware that so many of her family were at her bedside for a tender and spiritual devotion to bid her a joyous reunion with Earl, her parents, siblings and others who she was so lovingly looking forward to seeing once again. She passed forward just a few hours later. She loved her Savior, Jesus Christ and was stalwart to serve Him, and in her desire to be re-united with her family into the eternities. A viewing will be held June 21, 6:00-8:00 p.m. at the LDS church at 1450 East 1500 North in Logan Utah. Funeral services will be June 22 at the same location at 1:00. A viewing will be held one hour prior. Burial in Clarkston Cemetery following the services. Services are under the direction of Cache Valley Mortuary.

The family of Mary Furhiman Griffin created this Life Tributes page to make it easy to share your memories.