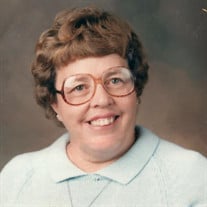 Margo McBride Krusi was born at home in Hyrum, Utah on October 1, 1933 and passed away at her home in Hyde Park, Utah, September 28, 2021, just three days before her 88th birthday. She was the third daughter of Bill and Flora Jensen McBride. In 1933 the country was in the Great Depression and Margo grew up in a basement house next to the 1st Ward Church with her older sisters Jeri and JoyAnne. When she was almost 12 her brother Jeff was born. As a child she liked to go fishing with her dad and learned to swim in Hyrum Dam. After a lot of swim lessons by her dad she became the youngest person to swim across the dam at age 11. She loved swimming and regularly swam for most of her life. She grew up learning to work hard in the large family garden and later picking fruit for summer jobs. Books were very important to her as a child and reading became a lifetime pleasure. She has been a founding member of the Neighborhood Bookclub for almost 20 years. After graduating from South Cache High School Margo set her sights on college. She loved the experiences she had at USU. She graduated from USU with an elementary education teaching degree in 1956. She also met her future husband, Fred Krusi, while studying in the USU library. After many years of dating they were married in 1957. Margo taught school in Murray, Utah, at the Indian School in Brigham City, and then Clinton, Utah until the birth of her first child, her daughter Barbie. She later went back to teaching when her kids were mostly grown, teaching second grade at Woodruff Elementary and Wilson Elementary in Logan, Utah. In the summers through college Margo worked in Wyoming, first in Yellowstone National Park, and later she spent many summers in Grand Teton National Park. She loved hiking in the Tetons on her days off. One of her favorite accomplishments was climbing the Grand Teton. After their marriage she and Fred also lived and worked in the town of Jackson and it was a favorite yearly destination vacation spot the rest of their lives together. After many moves the first few years of their marriage Margo and Fred built a home in Hyde Park so Fred could farm along with teaching school. The family grew there when John, Greg, and Peter were born. Margo had many associations in Hyde Park through the Variety Club, The Starlighters Square Dancing Club, and with church friends and neighbors. Margo has resided in the same home for 60 years. Margo loved to walk and for decades never missed her evening walks on the canal banks with her dogs. Margo loved growing flowers, especially sweet peas. She had a beautiful raspberry patch that supplied the family with many bottled raspberries. She always loved horses and liked to ride with Fred and the family in the hills and canyons above Hyde Park. Mostly she loved collie dogs, getting her first collie the first year she and Fred lived in Jackson, Wyoming. For several years she was a collie breeder and sold the puppies for $50.00 apiece for a little extra spending money. We like to think that she was greeted in heaven by her beloved collies, Kelly, Holly, Treasure, Echo, Sarah, Brook, Lassie, Kiska (the Malamute), Chloe (the Yellow Lab), and Duffy. Her latest collie Shane has been a very special friend and guardian to her for the past 7 years. Margo and Fred liked to travel and they vacationed every year enjoying neighboring states plus Alaska, Canada, Ireland and Belize. A travel highlight was in 1999 when she took a seventeen day journey with her daughter Barbie and granddaughters Brooke and Lindsey to Europe with the high school German club where she visited Germany, Italy, Switzerland, Austria, France and England. The adventures stopped in 2010 when Fred passed away suddenly at the age of 77. Margo has missed him every day since. Margo is preceded in death by her parents, and grandson Gabe Krusi.She is also preceded in death by her sisters and their husbands, Jeri McBride Woodward (Clair), JoyAnne McBride Regenthal (Al). She is survived by her brother Jeff McBride (Barbara) , daughter Barbie (Don) Corbridge, and sons John (Hollee) Krusi, Greg (Ann) Krusi, and Pete (Angela) Krusi, 19 grandchildren and 13 great grandchildren. Funeral services will be held Tuesday October 5, 2021 at the LDS Northwest Church 480 North 100 West. Hyde Park at 11:00 with a visitation from 9:30-10:45 that same day. Conducted by Bishop Ed Fisher. Burial is in the Hyde Park Cemetery.

Margo McBride Krusi was born at home in Hyrum, Utah on October 1, 1933 and passed away at her home in Hyde Park, Utah, September 28, 2021, just three days before her 88th birthday. She was the third daughter of Bill and Flora Jensen McBride.... View Obituary & Service Information

The family of Margo McBride Krusi created this Life Tributes page to make it easy to share your memories.

Margo McBride Krusi was born at home in Hyrum, Utah on October...