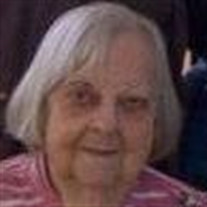 Margery Marie Hansen Jensen KnutsonOur beloved wife, mother, grandmother, great-grandmother, sister and friend, Margery Marie Hansen Jensen Knutson, 97, returned to her Father in Heaven on October 30, 2015.Marge was born February 5, 1918 in Tremonton, Utah to Oliver Hans and Annie Melvina Hansen, she was one of 11 children. She was raised by her Uncle W.P. and Aunt Esther Jensen and lived in Brigham City where she attended Box Elder High School.Marge married Oliver Andrew Knutson on October 9, 1935 and continued to live in Brigham City. Later, they were Sealed in the Logan LDS Temple. They lived in Garland for 49 years, at which time Ollie died. She continued to live in Garland until 2004 when she moved into the Heritage Park Care Center in Roy, Utah.Marge was a faithful member of the Church of Jesus Christ of Latter Day Saints where she served as the MIA Secretary for over 25 years. She was an example of faith, charity, and love and was an example to everyone around her. She found joy in serving others and her acts of kindness and service touched the lives of many. Marge was a dedicated and loving mother to her children, grandchildren and great-grandchildren. She cherished the time she spent with her family. She enjoyed crocheting, sewing, traveling, dancing and sing to Lawrence Welk and Mario Alonzo, Playing the harmonica and card games. She enjoyed collecting rocks, old bottles and coins. She loved genealogy and kept a daily journal.She worked at the Main Theatre and spent many years by her husband’s side at the Utah State Fair. They provided meat, vegetable and many hand-made items to their children. She made wonderful baked goods and her family looked forward to her puffed wheat balls every Christmas.She is survived by three children, Oliver Ray, Devon (Marilyn), Jolene (Max) Stander, Daughter-in-law, Mirella Knutson, 19 grandchildren, 74 great-grandchildren and 22 great-great-grandchildren; brother, Jack Hansen and sister, Colleen (Bill) Harris.She was preceded in death by her husband, Ollie, son, Darryl (Bud), Daughter-in-law Karen, 4 grandchildren, 3 great-grandchildren, 4 brothers and 4 sisters.Funeral services will be held on Thursday, November 5, 2015 at 11:00 a.m. at the Regal Country Ward Building, 3939 W. 4000 S., West Haven, Utah. Friends may Visit on Wednesday evening Nov. 4 2015 from 6:00-7:30 p.m. and on Thursday at 9:30 a.m. till 10:30 am at the church. Interment will be at Bear River City Cemetery.The Family would like to thank the many nurses, doctors, and staff at Heritage Park Care Center and Inspiration Hospice for your wonderful care and kindness you have shown in her behalf.Services are under the direction of Cache Valley Mortuary, 3207 N Main North Logan Ut, (435)-787-8514. Condolences may be shared online at www.cvmortuary.com.

The family of Margery Marie Knutson created this Life Tributes page to make it easy to share your memories.