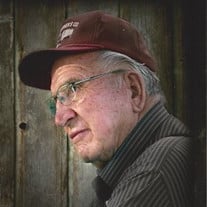 North Logan, Utah –A. Leo Krebs passed away on July 16th, 2014 surrounded by his family. Leo was born on August 6, 1920 in North Logan, Utah to John and Martha (Berger) Krebs. Leo attended schools in North Logan through the eighth grade, then traveled for four years to Hyrum where he graduated from South Cache High School. He studied dairy science at the Utah Agricultural College (now USU). He later served a mission for the LDS church in Texas and Louisiana. On January 20, 1947 Leo married Irma Loraine Benson in the Logan LDS Temple. They built their home in North Logan, and spent their life together involved in farming while raising their five children. He held several jobs to augment the family income. For various periods of time he was a dairy herdsman at USU, a school bus driver for Cache County School District, and watermaster for the Logan, Hyde Park and Smithfield Canal Company.In 1920, North Logan consisted of a small number of farming families whose lives centered around the activities of a single North Logan LDS ward. Leo arrived in the summer, the fourth child of eight, while his closest brother Vern was born 14 months later. They grew up working and playing together, developing a bond that lasted until Vern’s death in 2009. In high school they traveled together, along with NaRay Ormond, to Kansas City to compete in the National FFA Dairy Cattle Judging Competition, and they returned with the first place trophy. They shared a love for dairy cattle, horses and all things outdoors. While farm work was a constant, they found time for camping, hunting and fishing, endeavors that provided fond memories for their boys who welcomed the break from the steady work. Leo loved state fairs, county fairs, parades, rodeos and horse-pulling contests.He was an avid Aggie basketball fan, arguably one of the longest-standing fans with season tickets dating back to the early 1960s. Leo and Irma took pride in their garden. They employed whatever means necessary to ensure that they raised peas that ripened earlier, tomatoes that grew a little larger and corn that was just a bit sweeter than that produced in neighboring gardens. They then took joy in sharing most of the bounty friends and family.Leo was devastated when Irma died suddenly in 2011, and the odds seemed to be stacked against his being able to remain in his home. He had lost a leg due to an infection several years prior and Irma appeared to be his lifeline to independence. Leo surprised everyone by managing to remain in his home for almost three more years. He reached out for support and the community responded. The core support came from care-givers Dave and Bonnie Flandro who provided exceptional housekeeping, food and personal care on a daily basis. The extended support came from the community who responded with frequent visits, often involving treats and offers of service. Additionally, Clair Robinson, Leo’s nephew who lived across the street, made himself available, anticipating Leo’s needs and assisting him in ways too numerous to mention. In this busy world, Leo had time for everyone. He received great pleasure when he was able to make others laugh and smile. No amount of human interaction was too much for him. He thrived on every visit and sought more. This fact was confirmed over the last few days of his life. While his kidneys shut down, he focused on the steady stream of visitors who stopped by his hospital room. The nurses worried that he might be too tired to welcome them all, but he was happiest when the room was overflowing with friends and family. Leo will be missed. While family and friends are mourning his passing, the true loss is borne by those who missed the opportunity to become a friend of Leo’s.Leo is survived by his five children: Linda (Laurel) Hayes, Lynn (Carolyn) Krebs, Von (Sara “Sally”) Krebs, Ilene (Steve) Hooper, and Maureen (Shirl “Mac”) McKay, twelve grandchildren, 29 great-grandchildren, sisters Ruth Robinson, Marie Patterson and Irene Murray. He was preceded in death by his wife, Irma, his brothers Phil, Vern and Floyd, and his sister Emma Anderson.Services will be held at 12 p.m. on Monday, July 21st, 2014 at the North Logan Stake Center, 2750 N. 800 East, North Logan, Utah. Friends may call on Sunday evening, July 20th, from 6 to 8 p.m. at the Stake Center. Interment will be in the Logan Cemetery.The family would like to thank Dave and Bonnie Flandro, Clair Robinson, the neighbors,the IHC physical therapy staff, Dr. May and the nursing staff at Logan Regional Hospital for the warm, personal care Leo received. In lieu of flowers, donations may be made to your favorite charity.Funeral services are under the direction of Cache Valley Mortuary, 3207 North Main, North Logan, Utah. 435-787-8514. Share condolences and memories at www.cvmortuary.com.

The family of Leo Krebs created this Life Tributes page to make it easy to share your memories.