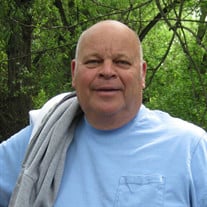 Larry Roger Lundquist, age 75, passed away Sunday, September 1, 2019 at his home in Nibley, Cache County, Utah. He had fought a long and courageous battle with a brain tumor. He moved on peacefully from this earth life surrounded by those he dearly loved. Larry was born November 12, 1943 in Pasadena, Los Angeles County, California to Carl Roger Herbert Lundquist and Ellen Sorenza Peterson Lundquist. He was the second of two children. On December 14, 1968 he married the love of his life, Eileen Ririe, in La Habra, Orange County, California. They were sealed for eternity in the Los Angeles, California Temple of the Church of Jesus Christ of Latter-day Saints on September 21, 1978. Together they raised their four children: Jody (John) Woodruff of Fredericksburg, Virginia, Laura (Steve) Roberts of Ammon, Idaho, Roger (Sarah) Lundquist of Saint George, Utah, and Sheri (Jason) Leishman of Millville, Utah. Larry’s greatest joy in life was his family. He often spoke proudly of their many accomplishments and the happiness they brought him. His home was always a small piece of heaven. When you walked into his home he was quick to offer you a cold soda and something to eat. He loved everyone and everyone loved him. He would go out of his way to help a neighbor, friend, family member, or a stranger. Much of his wealth and success was shared freely with those he cared about. He truly lived an abundant life. Larry was a creator and inventor. He always had a pencil in hand to draw something new to help make life easier. Many of these items he fabricated himself. He loved country music. It always played in the background of his businesses. Since his diagnosis, listening to classic country music (played through YouTube) was a comfort and joy to him. Larry loved the retail meat business. He owned and operated seven retail meat markets over several years. When he was 15, he started working for Alpha Beta grocery store in Southern California and learned the trade of Meat Cutter there. He owned and operated his first retail meat market at the age of 20. He loved the retail meat business and put his heart and soul into each of his meat markets. Throughout his life he would reminisce about the various aspects of the retail meat industry and the joy and success he had in being a part of it. After many years in the retail meat business, he shifted his professional focus to managing and selling restaurant and marketing equipment. He was a natural businessman and in 1982 he opened Lundquist Marketing Equipment and years later Rent-A-Scale. His true joy in his professional career was the many friendships he made. He was preceded in death by his father, Carl Roger Herbert Lundquist, and his mother, Ellen Sorenza Peterson. He is survived by his wife, Eileen Ririe, his brother Roel (Cheryl) Lundquist, and his four children: Jody (John) Woodruff, Laura (Steve) Roberts, Roger (Sarah) Lundquist, and Sheri (Jason) Leishman. He has twelve grandchildren and eight great-grandchildren. We wish to thank the many hospice nurses and assistants who served Larry throughout his final months. He truly loved each of them. Funeral services will be held at the LDS Stake Center 3701 South 450 West Nibley, Utah 84321 on Saturday September 7 at 11:00 AM with a viewing prior from 9:30-10:30 AM. There will also be a viewing on Friday September 6 from 6:00-8:00 PM at the same location. Funeral Services are under the direction of Cache Valley Mortuary 435-787-8514. Please share a memory of Larry at www.cvmortuary.com

Larry Roger Lundquist, age 75, passed away Sunday, September 1, 2019 at his home in Nibley, Cache County, Utah. He had fought a long and courageous battle with a brain tumor. He moved on peacefully from this earth life surrounded by those he... View Obituary & Service Information

The family of Larry Roger Lundquist created this Life Tributes page to make it easy to share your memories.