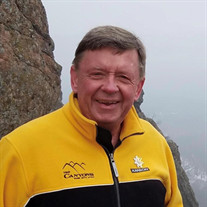 Kevan “Kevanagon” Cliff Eyre, age 67, died on May 6, 2021, in Providence, Utah, after dealing with complications from cancer. Kevan spent his last days surrounded by his loving children and family. Born and raised in Logan, Utah, Kevan loved the mountains surrounding Cache Valley and spent much of his youth fishing and hunting in the woods. Later in life, he dedicated much of his time to teaching others to love the mountains by working as a ski instructor at Beaver Mountain in Logan Canyon and eventually establishing the ski school at Cherry Peak Resort in Richmond, Utah. Born May 7, 1953, Kevan was the fourth of five children born to Ruth Verla Swenson and Howard Dean Eyre. After graduating from Logan High in 1971, Kevan served a full-time mission for The Church of Jesus Christ of Latter-day Saints in Kentucky and Tennessee. In 1976 Kevan married Michelle Hooper in the Logan Utah Temple. Together they had six children before divorcing in 2006. Kevan attended Utah State University, graduating with a degree in Political Science in 1977. He went on to graduate from the Brigham Young University J. Reuben Clark Law School in 1981. Although he worked as a lawyer for several years following his graduation, Kevan’s true passion was teaching skiing. In 2004, he transitioned to ski instructing full time, working for several years at The Canyons Resort in Park City, Utah, before returning to the Cache Valley. Like his mother, Ruth, who he lovingly cared for during her final four years of life, Kevan had a special place in his heart for teaching children and for cultivating the earth. Whether he was growing giant pumpkins in his garden to donate to his neighborhood kindergarten classes to carve for Halloween, or performing magic tricks and telling animated stories for his ski school classes, Kevan was beloved by children in his communities everywhere. In addition to skiing, gardening and teaching children, Kevan had a true love for Volkswagen Westfalia Vanagons. He owned more than 100 throughout his life and treated them as passion projects, buying and restoring them to good order before selling them and utilizing them for family camping and fishing trips in between. In his 67 years, Kevan traveled to five of the seven continents, usually taking one-on-one trips with each of his children or some of the many close friends he made throughout his life. For him, seeing and experiencing the world and history first hand were the best ways to learn. Kevan was preceded in death by his parents and is survived by his six children, Brittani, Chelsia, Tenille, Serenity, Aubrey, and Howard; three sons-in-law, Aaron, Samuel, and Paul; 16 grandchildren; as well as his four siblings, Richard, Chris, Rawlin, and Sheri. In lieu of flowers, donations may be made to the Kevan Eyre Instructor Certification Scholarship with Cherry Peak Resort at the following website link: https://gofund.me/a99cbb65. A graveside-only service will be held for Kevan on Thursday, May 13, at the Logan City Cemetery at 10 a.m.

Kevan &#8220;Kevanagon&#8221; Cliff Eyre, age 67, died on May 6, 2021, in Providence, Utah, after dealing with complications from cancer. Kevan spent his last days surrounded by his loving children and family. Born and raised in Logan, Utah,... View Obituary & Service Information

The family of Kevan Cliff Eyre created this Life Tributes page to make it easy to share your memories.