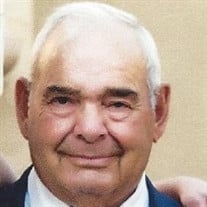 Kendall Lee Atkinson, 75 of Hyrum, passed away Tuesday, June 24, 2014, doing what he loved most, fishing at his favorite fishing spot, Blackfoot reservoir. He was born on Aug. 20, 1938, in Logan to Clifford Lee and Lolin Smith Atkinson. He lost his mother when he was 9 years old. He attended Logan schools and graduated from Logan High in 1957. While in high school, he was on the seminary council and participated in track and football. He was enlisted in the Army Reserve from 1957-1963. He married Laura Lee James on Sept. 26, 1958, in the Logan temple. Together they had four children: David, Roger, Eugene and Sandra. They made their home in Hyrum. Laura Lee passed away on Sept. 19, 1985, from cancer. Kendall was a volunteer firefighter for Hyrum City for many years. He supported his family by working in the roofing business. He took pride in doing a good job and was a hard worker until he was in his late 60s and retired. Most weekends were spent as a family camping and fishing. On July 24, 1987, Kendall and Ivy Mae McBride eloped to Jackson Hole, Wyoming. Together they enjoyed many years of traveling the country, fishing, camping and spending winters in Yuma, Arizona. Ivy Mae passed away July 31, 2010. The only thing he enjoyed more than fishing was his grandchildren and great-grandchildren. Grandpa was always known to carry a bag of M&M's in his pocket or threatening to give them a "good tunin'." After 51 years, Kendall returned to the temple and enjoyed attending many temples and serving others. Kendall is survived by his sons, David (Gayla), Roger (Cathy), Eugene, and his daughter Sandra (Rob) LeVan, his step-children, Steven (JoAnn) McBride, Cindy Mason and Kim McBride, 29 grandchildren and many great-grandchildren. He is also survived by his brothers, Raymond Lynn (Maureen) and Donald (Ann Marie) and his sister Nancy (Eldon) Bair. He was preceded in death by his parents, his sweethearts, Laura Lee and Ivy Mae, stepson Darwin McBride, grandsons Chet Atkinson, Casey McBride and his great-grandchildren, Kayden Christensen and Jozie Atkinson. A special thanks to the three fishermen and the Caribou County Sheriff's Office that assisted with our dad. Funeral services will be at 11 a.m. Tuesday, July 1, at the Hyrum 5th Ward Church at 245 Apple Drive in Hyrum. There will be a viewing from 6-8 p.m. Monday, June 30, at the church and from 9:30-10:30 a.m. Tuesday. Burial will be in the Hyrum City cemetery with military honors. Arrangements are under the direction of Cache Valley Mortuary, 3207 N. Main, North Logan, 435-787-8514. Online condolences may be shared at cvmortuary.com.

Kendall Lee Atkinson, 75 of Hyrum, passed away Tuesday, June 24, 2014, doing what he loved most, fishing at his favorite fishing spot, Blackfoot reservoir. He was born on Aug. 20, 1938, in Logan to Clifford Lee and Lolin Smith Atkinson. He... View Obituary & Service Information

The family of Kendall Lee Atkinson created this Life Tributes page to make it easy to share your memories.