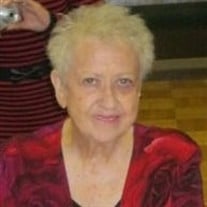 Joyce Buxton Tarbet went home to her family and friends who have gone before her on September 26, 2014. Joyce was born in Driggs, Idaho in the shadow of the majestic Teton Mountains on March 16, 1932. Her paternal grandmother, Martha Alice Carson Buxton, delivered her into this world. Joyce was the eighth child of Alfred Lester and Mercedes Kent Buxton. The family moved to Lewiston, Utah in 1934 where they raised ten children.Joyce attended Lewiston Elementary School, Lewiston Junior High and graduated from North Cache High School in 1950. Joyce had “her foot in everything” and was a very talented woman. She was able to do anything she wanted to, and no matter what she did she went the extra mile. Joyce spent her entire life serving others and helping the community, she was passionate about her work at the Cache Community Food Pantry, the Republican Party, and on the board of the Juvenile Justice System. She dearly loved spending time with children and worked in the nursery and coached youth sports. Joyce adored photographs, music and family history. She is survived by her husband James Lamar Tarbet, and their children, Kellen Lester Tarbet of Logan, Utah (Jill); Laren Dean Tarbet of Annandale, Virginia (Rachel); Julie Bergeson of Lewiston, Utah (Dan); and Brett Lamar Tarbet of Trenton, Utah, nine grandchildren, three great grandchildren, two brothers Val Buxton of Orem, Utah and Nate, Buxton of Preston, Idaho. She was preceded in death by her parents, two children James Alan Tarbet and Terri Lee Tarbet, four sisters Mary Hansen, Helen Layne, Alice Poole, Rowene “Wink” Ransom and three brothers Lyle Buxton, Alfred Buxton and Ted Buxton. A celebration of Joyce’s life will be held Tuesday September 30, 2014 from 5:00pm to 8:00pm at the Lewiston City Ballroom, located at 29 S Main St, Lewiston Utah. Friends and family are invited. In recognition of her many years of outstanding and selfless service to the citizens of Northern Utah, the family requests that in lieu of flowers donations be sent to the Cache Community Food Pantry in honor of Joyce Buxton Tarbet. Sonations can be sent to 359 S Main Street, Logan, Utah 84321 or made online at CacheFoodPantry.com. The family would like to give a special thanks to Dr. Douglas Maready and staff, Intermountain Home Health and Hospice and Logan Rehabilitation and Nursing.

Joyce Buxton Tarbet went home to her family and friends who have gone before her on September 26, 2014. Joyce was born in Driggs, Idaho in the shadow of the majestic Teton Mountains on March 16, 1932. Her paternal grandmother, Martha Alice... View Obituary & Service Information

The family of Joyce Buxton Tarbet created this Life Tributes page to make it easy to share your memories.

Joyce Buxton Tarbet went home to her family and friends who have...