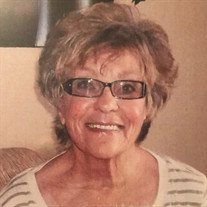 Josephine Parkinson Ciaraldi The Ciaraldi family lovingly acknowledges the passing of wife, mother, grandmother and friend, Josephine Parkinson Ciaraldi on Monday, April 03, 2017 at age 76 as a result of cancer. Jo was born in England (Chelmsford, Essex) January 5, 1941, the third of five children to George and Sylvia Parkinson. As a very young woman, she met and fell in love with a handsome young American Airman who was stationed in Essex, Gerry (Chuck) Ciaraldi. They married April 11, 1958 and although she always maintained her charming Brittish accent, she would live the remainder of her life in the United States, eventually gaining her citizenship in 2004. Jo was the brightest light in Gerry's life and happy mom to three beloved children, Cheryl Ciaraldi Haines (Steve) now of San Bernardino, CA, Dale Ciaraldi Beaver (Rex) now of Moreno Valley, CA and Mike Ciaraldi (Tiffanie) of North Logan, Utah. She also had great joy in her nine grandchildren and 8 great grandchildren and 2 great great grandchildren. Following Gerry's retirement from the Air Force in 1977, a civilian job with Bourns eventually brought the family to Cache Valley in 1983 where Jo worked as Director of Nursing with the Sunshine Terrace foundation. Through her work, Jo made many lifelong friends and endeared herself to many families as she gave compassionate care to patients and coworkers alike. She retired as Assistant Administrator of the Terrace Grove Assisted Living Center. Tremendous gratitude is expressed to treasured friend, Monica Harris and Integrity Hospice (Robert, Debbie and Sara) for their compassionate end of life care. Jo's family will always remember the beautiful flowers she planted everywhere they lived, but ask that in lieu of flowers, donations be made to a childhood cancer foundation. At Jo's request, no formal memorial services will be held.

The family of Josephine Parkinson Ciaraldi created this Life Tributes page to make it easy to share your memories.