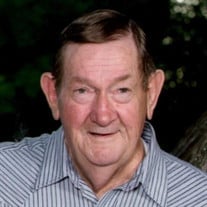 Joseph Anderson Peterson Our dear husband, father, brother, grandfather and great grandfather passed away on August 2, 2017 at the Rocky Mountain Care Center in North Logan, Utah. Joe was born on July 23, 1938 in Sterling, UT to Axel and Alice Peterson. He was the fourth child and grew up in Ephraim, UT until age nine. They then moved to Nibley, and at age 13 moved to Logan where he attended Logan Jr. High and Logan High School. He enlisted in the United States Navy on January 25, 1957 and served until January 25, 1961. He served aboard the USS Magoffin and the USS Bexar. His duties included ship maintenance and supervision of maintenance crew. While at Eniwetok, in the Marshall Islands, they set off atomic bombs 900 feet underwater. He sailed around the world two and a half times and received an honorable discharge. On February 14, 1961 he met Elaine Robertson of Nibley, UT and on June 15, 1961 they were married in the Logan LDS Temple. Joe’s working years included farming, carpentry and mostly floor installation of carpet, linoleum and formica. Joe, Elaine and children lived in Nibley, UT for many years. The last nine years Joe and Elaine lived in an HOA Retirement Community in Hyde Park, UT. Joe loved to camp, fish, deer hunt, and horseback ride; which were activities the family enjoyed together. He dearly loved his children, grandchildren, and great grandchildren. He just celebrated his 79th birthday surrounded by his family. He is survived by his wife Elaine of 56 years, their children, Sharlene (Marty) Becker of Clearfield, UT; Rod (Lisa) Peterson of Cache County, UT; six grandchildren, Tia (Ken) Cheesbrough of Rawlins, WY; Zach Peterson of Preston, ID; Terrah Bowden of Amalga, UT; Shannon (Kyle) Trimble of Lewiston; Caden (Karissa) Peterson of Hyde Park; Josilyn (Braydon) Palmer of Moab, UT; and 9 great grandchildren. Also, his sister Connie (Nordeen) Blau, brother in-law Don Jacobson, brother Clark Peterson, brother Farrell (Tammy) Peterson; and many nieces and nephews. Preceded in death by his parents, Axel and Alice Peterson; his sister Audrey Jacobson, and sister in-law Ellie Peterson.Graveside services will be held at 10 am at the Hyde Park Cemetery located at 400 East Center Street, Hyde Park, UT.

The family of Joseph A Peterson created this Life Tributes page to make it easy to share your memories.