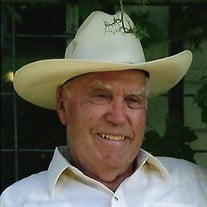 Joseph Rokell (Kelly) Homan, 95, passed from this life surrounded by loved ones on July 22, 2017. Kelly was born in Jefferson Missouri on April 30, 1922 to Herschel and Nellie Homan. He was raised on a cattle ranch in Nebraska along with his brother Keith. This is where he began to learn the value of hard work, determination and sacrifice, which stayed with him throughout his lifetime. He attended Idaho State University on a football scholarship and later voluntarily enlisted in the United States Air Corp and worked in the Intelligence Department. Kelly met Betty Gillies at a dance while he was stationed in California and they were married on May 20, 1943 and were later sealed in the Los Angeles Temple on October 20, 1964 after Kelly joined the LDS faith. They were blessed with 2 daughters, Kay and Linda. They were honored to celebrate 70 years together before Betty's passing four years ago. While living in Nebraska and California, Kelly worked as a rancher, a corporate executive and business owner. He loved retiring to Providence 35 years ago and stayed active raising livestock, hunting, becoming Water Master and willingly assisting Betty with her frequent party planning. Kelly often shared stories of his childhood and living through the Great Depression, Dust Bowl and World War II. His tremendous work ethic and resilience is part of the legacy he left to his family. He was a tough, hardworking cowboy, often a tease, but dependable and devoted in countless ways. Kelly is survived by his daughters, Kay Homan and Linda Kangas and grandchildren Marie (Shawn) Owen, Steven (Jenifer) Kangas, April (Sven) Peery, Brian (Oluchi) Kangas, Grant Kangas and many great-grandchildren and relatives. A heartfelt thank you to the medical and hospice staff who aided him during his illness. Funeral services will be held at 11:00 am on Saturday, July 29, 2017 at the Providence 9th Ward Chapel at 180 South 485 West Providence. A viewing will be held from 9:30 to 10:30 am. Interment will be held in the Providence City Cemetery. Condolences may be shared at cvmortuary.com.

Joseph Rokell (Kelly) Homan, 95, passed from this life surrounded by loved ones on July 22, 2017. Kelly was born in Jefferson Missouri on April 30, 1922 to Herschel and Nellie Homan. He was raised on a cattle ranch in Nebraska along with his... View Obituary & Service Information

The family of Joseph Kelly Homan created this Life Tributes page to make it easy to share your memories.