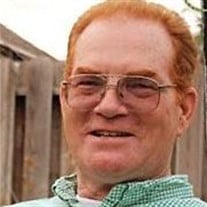 After eleven years of bravely and valiantly, without complaint, fighting three rare liver cancers our dearly loved John Robert Van Duren, 61, was called home on April 19th, 2017 in Smithfield, Utah. Robby was born February 23, 1956 to John Henry Van Duren, Jr. and Lucille Bird in Reno, Washoe, Nevada. His family moved frequently during his childhood eventually settling in Salt lake City, Utah. He graduated from West High School in Salt Lake in 1974 and afterwards honorably fulfilled a mission to the California San Diego Mission. Robby loved unicycling, bike riding, camping, the color red, working outdoors, and he loved the Tetons! He was a professional truck driver for over forty years.His love and knowledge of the scriptures was unparalleled. Home Teaching was a critical part of his life, always consistent. He was a Temple Worker in the Jordan River Temple, and an ordinance worker in the Logan Temple. He was deeply converted to his Faith. While in high school he met the love of his life Charlene Kay Tucker. They corresponded while he was on his mission and in August 1977 they were sealed for time and eternity in the Salt Lake LDS Temple. Robby and Kay were blessed with four precious ‘Jewels of Heaven’: Charity LaRae, Heather Lucille, Amber Kay, Andrea Mae, four beautiful daughters who blessed his life forever and later four equally precious sons: Riley, Chad, Ivon and Brian. Our Robby’s love for his Savior had no bounds. His trust in the Savior also had no bounds. All the decisions in his life were based on that love and trust. Jesus Christ was his best friend. His unwavering faith in his Redeemer carried him throughout all of his trials in life. For eleven years he was carried through the pains and sufferings as the cancer ravaged his body. John Robert Van Duren will forever be remembered as a choice son of God, completely dedicated to His Lord and Savior, his best friend, his reason for being.Robby is preceded in death by his mother and father, mother in law Alice Tucker, brothers Samuel and Dwayne and sisters: Elizabeth and Loretta. He is survived by his eternal companion Kay-Kay, four daughters Charity (Riley) Hepworth, Heather (Chad) Pehrson, Amber (Ivon) Cullumber, Andrea (Brian) Thames; 17 grandchildren: Saige, Madison, Emily, Hannah, Kaden, Robby, Ciara, Caleb, Joey, Christopher, Lily, Mallie, Charlie, Jack, Tommy, Annie, Sarah and two more on the way: Brothers: Aaron (Lis), Lorin; Sisters: Marie (Christian) Shreve, Shirley (Marv) Rowley, Michelle, Sarella (John) Anderson; Brother and Sister-in-Law Gary and Pam Russell; Sister-in-law: Ronda Gardner, and numerous nieces and nephews. He is also survived by step mother: Vai Van Duren, and beloved “dog” Simba who grieves for him.Funeral services will be held at 11:00 a.m. Monday, April 24, 2017 in theSmithfield 4th Ward LDS Chapel 660 West 200 North Smithfield Utah. A Viewing will be held for friends and family from 10:00 to 10:45 a.m. Monday morning at the church. Interment will be in the Smithfield City Cemetery following the services.The family would like to express their heartfelt love and appreciation for all the prayers and unfailing support that were offered in his behalf. We would also like to express our appreciation for all the doctors and healthcare providers over the years that never gave up on him. Special thanks to Dr. D. Barton Avery , Dr. LeGrande Belnap, P.A. Cara Drury, Dr. John K. Hayes, Jr, Dr. Brandon Fisher and Dr. Ali Ben Jacob and all of their staff and all of the Doctors and Nurses of the IMC Liver Transplant team, and all of the doctors, nurses, aids and technicians at Logan Regional Hospital emergency. They all believed in him. Extra special love and thanks to IHC Palliative care. They lovingly cared for our Robby and our family. They shared our burdens, provided us with genuine love and compassion and showed us that angels on earth do exist. Thank You Holly, Klea, Kim and Dr. Porter. We love you all. Keep the Faith, Do the Work and All WILL be well.

The family of John Robert Van Duren created this Life Tributes page to make it easy to share your memories.

After eleven years of bravely and valiantly, without complaint,...