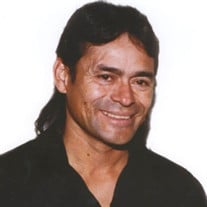 John L. Ranjel4/6/1951­11/17/15John was born April 6, 1951 to Sabas Ranjel and Augustina Longoria in Vernon, Texas. Johnwent to be with the lord on Nov. 17, 2015 surrounded by his wife, children, and family. John met the love of his life, Maria Herrera in Abilene, Texas in 1970. They later married on Dec. 5, 1971. Together they raised six children, Dora (Mark) Olsen, Dianne (Ron) Vandiver, Michelle (Brandon) Romer, Baby John (Lana) Ranjel, Monica Ranjel (Mariano Martinez), Jose Ranjel. He had 28 grandchildren and nine great­grandchildren. John was the ninth of 17 children, eight sisters and eight brothers, whom he enjoyed spending time with. One of his greatest joys was being a grandpa. He was always kind and loving to all who crossed his path. He didn't have much, but his generosity was beyond measure. He enjoyed working on cars, loved dancing, and enjoyed many laughs with friends and family. He was always the life of the party. John provided for his family and worked very hard. He worked at Thiokol for many years and remained active in agriculture. John was proceeded in death by his father, four siblings, grandson, and many aunts and uncles. He will forever be in our hearts. Those who wish to offer their condolences, may do so at a Celebration of Life on Saturday, Nov. 21, prior to the Memorial Service, from 9­10 a.m, at the Brigham City North Stake Center, 620 North 300 East. The service will follow at 10:15 a.m. The family wishes to thank Integrity Home Health & Hospice for the wonderful, kind and loving care of our father and family, as well, and all their services provided.

The family of John L Ranjel created this Life Tributes page to make it easy to share your memories.