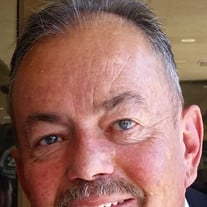 After battling a short illness, John Alan Israelsen peacefully passed away at the age of 62, surrounded by his family. He returned to his beloved parents, Lyle and Nancy on Mother’s Day, May 12, 2019. John was born into a large family on August 7, 1956, in Logan Utah, the 7th of 12 children, known as the “12”. He enjoyed an idyllic childhood in North Logan, where his love of family and friends became firmly cemented. He was active in the band and made many life-long friends in his years at Sky View High School. After graduating from high school, John served as a missionary for the Church of Jesus Christ of Latter-day Saints in the Paraguay-Uruguay mission. He attended Utah State University and received his Doctor of Dental Surgery from the University of Virginia in 1989. Prior to becoming a dentist, John worked for Bullen’s and traveled around the western states installing and repairing wheel lines. This work experience, along with traveling and hunting trips, helped him gain an almost unrivaled knowledge of places, people and how things work. John could often be heard commenting on the history of a little town or how a farm process was completed before the advent of modern technology. John had an infectious love and excitement for life and people. His friendships were widespread and everyone considered themselves to be his ‘best friend’. He influenced and touched so many lives with his natural generosity, often providing dental work for those who couldn’t afford it or even just sharing the produce from his garden with anyone and everyone. “Generous” is often the first word people use when describing John. John was one of Utah State University Athletics’ most ardent and generous supporters, holding season tickets to USU basketball for over 30 years. One of his greatest joys in life was to bring friends and family with him to watch Aggie football and basketball games. A skilled outdoorsman and avid hunter, John and his boys and friends spent many hours snowmobiling, enjoying nature together and making “emergency hunting trips”. Noted for his quick wit and a tireless sense of humor, he was beloved by all who became the recipient of his good-natured pranks. His greatest love, however, was that of his family. He was so proud of his children, their families and especially his grandchildren. He looked forward to every outing and spending time together. Always looking for any reason for a family gathering, John made sure everyone was invited and knew about the upcoming fun plans he was making that promised to be the “biggest and best ever”. John and his wife Angela (Murray) were blessed with four sons: Douglas (Jetta) of Orem; Justin (HyeKyoung) of Pleasant Grove; Thomas John (T.J.) (Samantha) of North Logan; and Anthony (Dani Swanson) of Midvale. John doted on his grandchildren: Gunner, Bristol, Lyle, and Cannon. John’s brothers and sisters are Douglas, Dwight, Jeanne Harrison, Laurie Ballam, Mark, Ned, Lila Geddes, Eve Jones, Richard, James, Bonnie Erickson. He was preceded in death by his parents, Lyle and Nancy (Marianna) Israelsen. Funeral services will be held at 12:00 noon on Saturday, May 18, 2019, at the North Logan Green Canyon LDS Stake Center, 1850 North 400 East. A viewing will be held at the same location on Friday from 6 to 8 p.m. and on Saturday from 10:30 to 11:30 a.m. prior to services. Interment will be in the North Logan Cemetery. Funeral services are under the direction of Cache Valley Mortuary (www. cvmortuary.com).

After battling a short illness, John Alan Israelsen peacefully passed away at the age of 62, surrounded by his family. He returned to his beloved parents, Lyle and Nancy on Mother&#8217;s Day, May 12, 2019. John was born into a large family... View Obituary & Service Information

The family of John Alan Israelsen created this Life Tributes page to make it easy to share your memories.