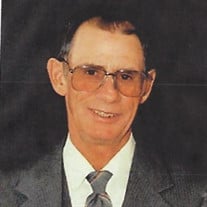 John, 95, passed away July 7, 2020 in North Logan, Cache, Utah. He was a resident of Maple Springs at the time of his death. John was born August 16, 1924, in Garden City, Rich, Utah, to Thomas Wilford Hansen and Beatrice Annie Negus, the second of four children. John served in WWII in the 25th Infantry Division (Tropic Lightning) from June 1943 to January 1946. He participated in the January 1945 Invasion of Luzon, Philippines, where he was wounded in action and received a Purple Heart. He finished his time in the Army in Japan as part of the occupation forces. During his service, he made lasting friendships that continued throughout the rest of his life. After returning home from the war, he married his eternal companion Noreen Beck on May 16, 1946, in the Salt Lake Temple of the Church of Jesus Christ of Latter-day Saints, and together, they made their home in Garden City, Utah. John worked construction for W.W. Clyde for many years, but returned to the family ranch to oversee operations when his older brother Stan unexpectedly passed away in 1973. John served in many positions in the church and community. He particularly enjoyed serving the many widows in the community throughout his life. He is preceded in death by his wife, Noreen, parents, brother and sisters, a granddaughter (Stephanie), and a daughter-in-law (Susan). He is survived by his eight children: Randall (Nancy), Jennie Whitmill (LeLand), Diane Weston (Monty), Bonnie Jorgensen (Jeffrey), Kenneth (Donna), Glen (Julie), Melvin (Gwenda), Elaine Braithwaite (Stephen), 40 grandchildren and 106 great-grandchildren. John often spoke of his family as his greatest treasure. The family expresses their gratitude to the staff of Maple Springs for their care during the time that the COVID-19 pandemic made it difficult for the family to visit and care for Dad. He often commented about how much he appreciated the things they did for him. In addition, a very special thanks to Julie Ward from CNS Home Health and Hospice, who brightened Dad’s days by being his friend and sharing with him the humor he so much enjoyed. Graveside services will be held Saturday July 11, 2020, at 11:00 am at the Garden City Cemetery. Internment: Garden City Cemetery, Garden City, Rich, Utah. Services arranged through Cache Valley Mortuary, 80 West 4200 North, Hyde Park, 435-787-8514. Online condolences may be made at www.cvmortuary.com.

John, 95, passed away July 7, 2020 in North Logan, Cache, Utah. He was a resident of Maple Springs at the time of his death. John was born August 16, 1924, in Garden City, Rich, Utah, to Thomas Wilford Hansen and Beatrice Annie Negus, the second... View Obituary & Service Information

The family of John K Hansen created this Life Tributes page to make it easy to share your memories.