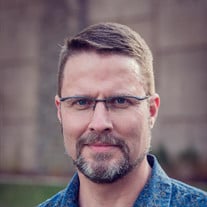 Jessie Lee Floyd passed away on June 11, 2020 at the age of 48. His family and friends will sorely miss him. Jessie was awarded the titles: burden bearer, car guy, best hugger, computer guru, baby whisperer, neighborhood confidante, invested father, and cookie dough maker extraordinaire. Funeral services will be held at 11:00 AM on June 17, 2020 at Millville Cemetery (310 East 100 North, Millville, UT 84326). The family requests that attendees wear face masks in order to maintain everyone’s health. Jessie was born in Logan, Utah to Willie and Gail Floyd on August 10, 1971. His family raised him to work hard. He discovered a love for fixing things early on and went to the high school auto mechanics national championship at age 17. Jessie’s hands-on abilities and strong work ethic served him well; even at a young age he held many jobs including working at a machine shop with his uncle. He also hauled cars and maintained his commercial driver’s license throughout his adult life so that he would always have a way to provide. After studying briefly at Utah State University, he served two years for the Church of Jesus Christ of Latter-day Saints in the Russia Samara mission from 1994 to 1996. Jessie also wanted to serve his country and joined the United States Army shortly thereafter. He was a Russian linguist from 1997–2001, and his military career took him to Missouri, California, Arizona, Texas, Germany, and Kosovo. While in the Army, Jessie met and married fellow soldier Emily Christina Davis. They were married August 30, 1997 in the Jordan River Utah Temple. Jessie and Emily had four children: Russell Maher—1998, Sarah Christina—2000, Leah James—2005, and Maria Hart—2007. Jessie worked and lived in Washington state from 2001–2004 as a civilian contractor. He also supported military operations in Kuwait in 2003. In 2005, the Floyds moved to Utah and found their home in Millville. This is where Emily and Jessie raised their children and built their family life. While working for Flying J, Jessie continued his education at Weber State University. He received his bachelor’s degree in Computer Science/Software Engineering in 2011. Jessie worked at Systems Implementers Inc., supporting military operations at Hill Air Force Base from 2011 until his passing in 2020. Jessie was beloved by his colleagues and recognized for his quality work and unfaltering commitment to integrity. Jessie is preceded in death by his father Willie and his brother Joshua. He is survived by his wife, Emily; children Russell, Sarah, Leah, and Maria; his mother Gail; siblings, Carmelle (Denny) Cox, Machelle (Dylan) Schorer, Naomi (John) Starcevich, Carrie Cook, Adam (Heather) Floyd, Andrew (Charlie Pfau) Floyd, and (Angie Ree).

The family of Jessie Lee Floyd created this Life Tributes page to make it easy to share your memories.